Emotional WHAT? Definitions and History of EQ (updated)

It all began about 2,000 years ago when Plato wrote, “All learning has an emotional base.” Since then, scientists, educators, and philosophers have worked to prove or disprove the importance of feelings. Unfortunately, for a large part of those two millennia, common thought was, “Emotions are in the way. They keep us from making good decisions, and they keep us from focusing.” In the last three decades, a growing body of research is proving just the opposite.

Definitions and History of Emotional Intelligence

In the 1950’s, Abraham Maslow wrote about how people could enhance their emotional, physical, spiritual, and mental strengths. His work sparked the “Human Potential” movement which could be the greatest celebration of humanism since the Renaissance. In the 1970s and 80s this led to the development of many new sciences of human capacity. Serious research was occurring to define both emotions and intelligence. One of these researchers was Peter Salovey, now Provost and Professor at Yale University. He says that over the last few decades, beliefs about emotions and intelligence have both changed — where intelligence was once perfection, people were recognizing that there was more to life. Where emotion was once perdition, people were recognizing that it might have substantive value.

“It is very important to understand that emotional intelligence is not the opposite of intelligence, it is not the triumph of heart over head — it is the unique intersection of both.” -David Caruso

Is “Heart Over Head” Better than “Head Over Heart”?

There is ongoing discussion about the origins of “EQ,” but consensus is that the seminal publication was an article called “Emotional Intelligence” by Peter Salovey and John “Jack” Mayer in 1990. The article defined EQ as a scientifically testable “intelligence.” Salovey says he and Jack were equal coauthors, and he got his name first because of a coin toss. The team has gone on to publish numerous articles, and their definition of EQ has evolved to:

In other words, there are four parts:

As their colleague David Caruso wrote to me:

“It is very important to understand that emotional intelligence is not the opposite of intelligence, it is not the triumph of heart over head — it is the unique intersection of both.”

Instead of Head vs Heart, emotional intelligence is about the two together

Daniel Goleman drew on the research of Salovey and Mayer, as well as several other key researchers and practitioners, for his bestselling book, Emotional Intelligence. In addition to the research, Goleman reviewed best practice in education. He wrote about two school programs, Six Seconds’ “Self-Science” and the New Haven Schools’ Social Development program. He also spoke with many “hard” science researchers and saw how their work connected with what was occurring on the leading edge in schools and organizations. (Here is an interview with Goleman where he discusses the origins.)

In 1997, Six Seconds’ team sought to take those best-practices and create a framework for teaching and practicing the skills of EQ. They went beyond the scientific definition to capture the practical value of the concepts that are worth teaching and learning. Six Seconds’ 1997 definition of emotional intelligence is, “The capacities to create optimal results in your relationships with yourself and others.” Later, I updated this to make it simply clear: “Being smarter with feelings.”

How Does Emotional Intelligence Become Practical?

Six Seconds also developed a model that captures those practices in three areas: “Know Yourself,” “Choose Yourself,” and “Give Yourself.,” with eight specific skills. Six Seconds’ approach mirrors David Caruso’s vision: The goal is to integrate thinking and feeling to live more effectively.

The Six Seconds Model is focused on action — within the three action steps, or “pursuits,” are eight learnable competencies.  These are measured by Six Seconds Emotional Intelligence Assessment, and there is proof that with training scores on these skills increase (see the research archive here).

The Six Seconds Model is introduced here, and explained in detail in this article about the competencies of emotional intelligence.

While the various models of emotional intelligence structure the concept differently, all are concerned with the integration of emotion, reason, and action.  Where “pre-EQ theory” suggests that emotion is a byproduct of thought, the EQ models all point out that emotion is meaningful unto itself.  Hence Six Seconds uses a triangle to show that thoughts, feelings, and actions are co-equally interlocking. 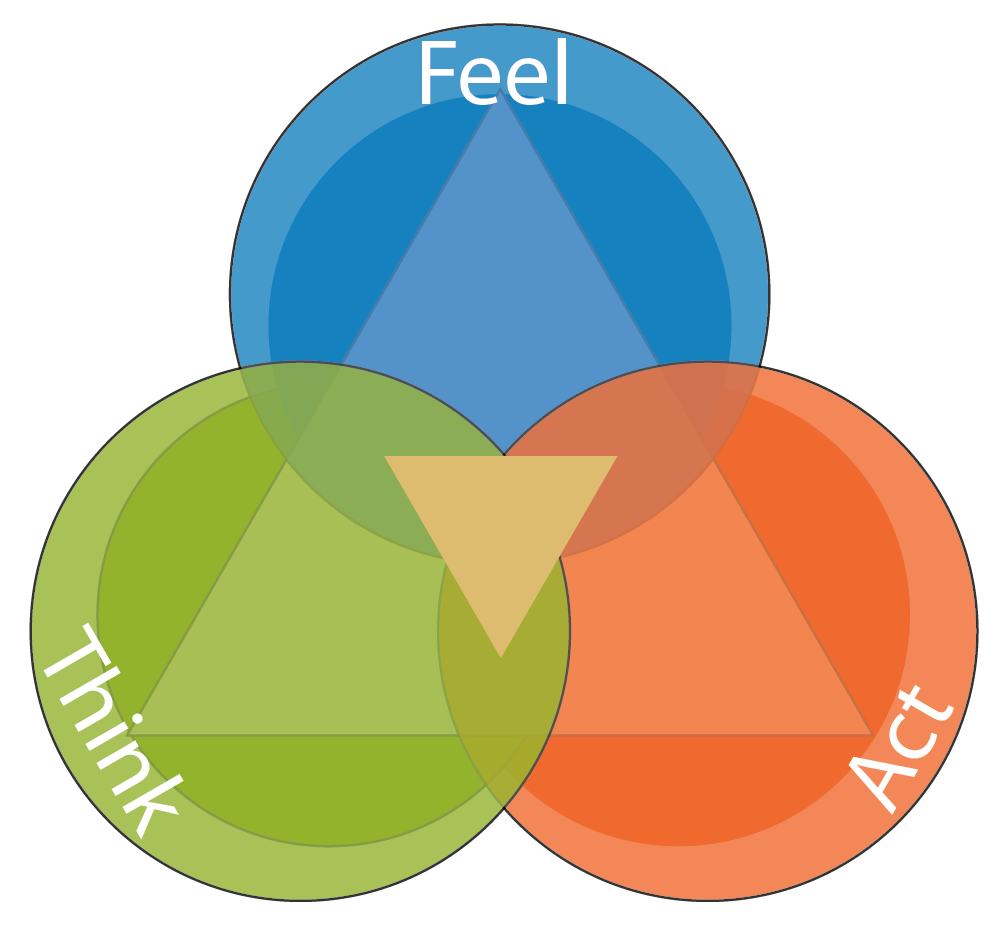 Another leading researcher whose work inspired both Goleman and Six Seconds was Antonio Damasio. In Descarte’s Error, Damasio outlines how emotions are functioning in the brain to create people’s sense of identity and guide rational decision making. He continues to discuss this work in The Feeling of What Happens, where he contends that our sense of being conscious comes from emotion.

Thoughts shape emotion… and emotion shapes thought. It’s a dynamic cycle that we can understand by practicing EQ.

The Neuroscience of Emotion

Damasio’s contributions provide powerful evidence that it is artificial to separate thinking and feeling. Other researchers would go further. Candace Pert was a leading neurobiologist who wrote Molecules of Emotion, was the chief of the brain chemistry section of the NIH from 1982 to 1988, and then a professor at Johns Hopkins Medical School. Prior to her untimely death, Pert was working to apply her revolutionary findings to a new cure for cancer.

Pert’s perspective is that “thinking” occurs in the brain and the body. All kinds of “information” is processed throughout the body — ideas, feelings, and maybe even spiritual impulses. While the brain has the most processing power, it is not necessarily driving the system. Pert’s assertion is certainly a far cry from the notion that the “rational” brain is the center of human essence. (Here is an interview with Dr Pert on the neuroscience of emotion)

Emotions are chemicals that carry information and energy inside us, and between us

Can You Measure Emotional Intelligence?

Reuven Bar-On has been interested in non-cognitive competencies since the mid-1980s. He developed a test that measures people’s self-report of these competencies, a test that was re-branded by its publisher as EQ-i. Bar-On’s definition is: “Emotional intelligence is an array of noncognitive capabilities, competencies, and skills that influence one’s ability to succeed in coping with environmental demands and pressures.” Again similar to Six Seconds’ approach, Bar-On is interested in real-world behaviors.

Dr. Bar-On explains how his work is similar to and different from Salovey/Mayer’s: “We are both assuming a cognitive schemata and attempting to empirically demonstrate that this construct is not personality. They are relating primarily to a specific set of emotional abilities and a potential for behavior (emotional intelligence), while I am focusing on emotional and social functioning or behavior (emotionally and socially intelligent behavior).”

Another definition comes from Q-Metrics, the creators of the EQ Map. They say: “Emotional intelligence is the ability to sense, understand, and effectively apply the power and acumen of emotions as a source of human energy, information, trust, creativity and influence.” One key insight from this model is that having a capacity or skill is not enough to create real-world results.

Q-Metrics’ CEO, Esther Orioli, explains, “I know plenty of CEOs who have the skill to empathize or give positive support. They don’t do it. Why not? Because they just don’t think it important.” Orioli points out that when leaders see how certain behaviors create more positive results, they do change their values. “Values dictate how we spend our time and resources. If we teach people skills in a vacuum, without relating them to their value and belief system, there is no real benefit,” Orioli concludes.

One of the most current measurement tools is the Six Seconds Emotional Intelligence Assessment; it was built “from the ground up” for development.  Focused on eight learnable competencies in a simple, clear model, the test provides insightful feedback and many development suggestions.  The purpose is to assist people to enhance the way they use EQ skills in their leadership and life.  A comparison of all these tests and more is online.

Emotional intelligence can be measured – with many powerful tools

While it’s been over 30 years since Salovey and Mayer published their original groundbreaking research on emotional intelligence, it’s still young in scientific terms. The science of “intelligence” was actively developed starting around 1900, and over 115 years later, we’re still defining basic intelligence. So no doubt the field of emotional intelligence will continue to develop.

Bar-On says the key is refining the research of development, effects, and assessment. He predicts we will also see, “A more clear connection between EI, individual/group performance, and group/organizational productivity. As a result of this activity, we will have a much more accurate and empirical view of what this construct is — and what it can and cannot do.”

Dr. Salovey offers a similar conclusion: “I agree with Dr. Bar-On. I think in the coming decade we will see well conducted research demonstrating that emotional skills and competencies predict positive outcomes at home with one’s family, in school, and at work. The real challenge is to show that emotional intelligence matters over-and-above psychological constructs that have been measured for decades like personality and IQ. I believe that emotional intelligence holds this promise.”

All the models touch on understanding yourself, taking charge of yourself, and then applying that awareness and ability in your interactions with others.

Many models of EQ, but common ground: be accurate about and carefully use emotion

Follow me
Latest posts by Joshua Freedman (see all)
23 Comments