The EQ and IQ Debate: Which Is Better? Honestly, It’s the Wrong Question.

The EQ vs. IQ debate is in full swing after Adam Grant’s latest article blasting the value of emotional intelligence. His critique is wrong, but important. Let’s take a deeper look at how he frames the relationship between EQ and IQ – and why it’s misleading.

His latest post on LinkedIn, “Emotional Intelligence Is Overrated,” is a follow up to his Atlantic piece, “The Dark Side of Emotional Intelligence,” where he warns it’s risky to develop emotional competence. He even speculates that Hitler used emotional intelligence to manipulate people into a frenzy of mindless loyalty. He clearly sees EQ and IQ as competitors, and encourages everyone to choose IQ.

Traditional psychological research has treated emotion and cognition as separate, even competitive. Grant perpetuates this myth with his recent arguments. But a lot of breakthrough research in neuroscience says something new, and powerful: Thoughts and feelings are interdependent.

Emotional intelligence is an enabler of cognitive development. Looking at the fascinating body of neuro-learning research from Mary Helen Immordino Yang and other cognitive neuroscientists (see Medina’s Brain Rules for a good introduction), a new perspective emerges: at a neurological level, thinking and emotion work together. We don’t “think” with one part of the brain and “feel” with another; the process of learning is built into the very same neural circuits as the process of social-emotional interaction.

For more on this, read Michael Miller’s article, The Myth of Keeping Emotions Out of It.

That’s because in the human brain, no signal is more powerful than emotion. Emotion is a primary filter; it’s a signal of survival. Any high school teacher can tell you: Algebra can’t compete with love. There are no truly rational decisions. A growing body of neuroeconomics research shows that we even make decisions with emotion, then justify those with logic. Obviously, we’ll do a better job in that process if EQ and IQ work together.

The Evidence for Emotional Intelligence

Science is a process of mounting evidence. Grant cites a couple of studies to support his opinion, but the real test comes from hundreds of studies that say something very different. While there certainly are studies that find EQ to have little value, and studies that find IQ to be essential, today Google Scholar lists over a hundred thousand studies on emotional intelligence, and the growing body of evidence links EQ skills to career success, school success, classroom behavior, stress management, leadership influence, employee engagement & performance, plant safety, change leadership, employee retention and even life success for professional athletes.

This year, for the first time, a “big data” approach was used to assess the significance of emotional intelligence around the globe. Using a random-sampling process from a database of over 75,000 people, Six Seconds created a sample that’s balanced across age, gender, role and region to publish The State of the Heart Report. Assessing both EQ and performance outcomes (e.g., effectiveness, relationships, decision-making). The result: Between 50-60% of variation in these performance scores are predicted by EQ. 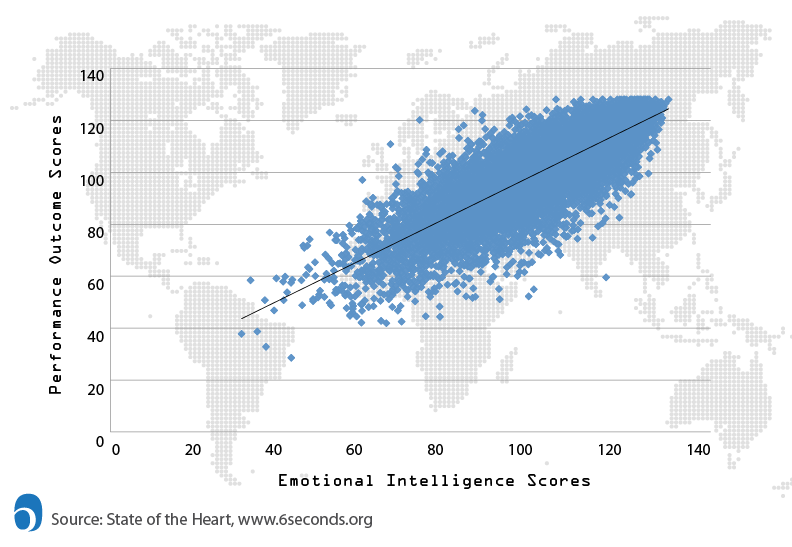 Perhaps more importantly, in real-world examples, in people’s daily lives, we can see emotional intelligence skills improve performance at work, in school, and in life.

None of this is to say that IQ is unimportant. In education and business we ALREADY focus on IQ. For the last century, cognitive development has been the primary goal of education: we have seen IQ scores increase by two standard deviations over the last century (that means a “somewhat smart person today” would be a “genius” in 1915). This “Flynn Effect” suggests (a) that IQ tests don’t actually measure intelligence, and (b) that around the world massive attention is given to cognitive development.

Growing IQ is helping us in many ways (creating innovations such as tiny computers that can be inserted into our hearts). At the same time, all this attention to IQ hasn’t solved other of the world’s most pressing problems: from poverty to environmental destruction to divorce to war. In fact, people today are more stressed, more lonely, and therefore less able to solve problems.

Here in Silicon Valley, you can throw a rock and hit a building full of uber-intelligent engineers. These people are painfully smart – they graduated or dropped out from the top universities, and they are only hired if they have good-to-scary levels of IQ. So now what? As Daniel Goleman explained in his rebuttal to Grant’s article, IQ gets you hired, but EQ gets you promoted.

“You need IQ to get hired, EQ to get promoted”

The Dark Side of Emotional Intelligence

While Grant’s LinkedIn post is deliberately hostile (promotional intelligence?), his Atlantic article has a more thoughtful and important point. Capabilities can be misused.

Emotional intelligence is a tool. Can someone misuse it? Sure. A baseball bat is for play, but in the wrong hands it can kill people. Does that mean we shouldn’t learn how to play baseball? One can make the danger argument for any skill, but it doesn’t make it inherently dangerous. There is nothing inherently manipulative about understanding one’s emotions and using that understanding for better decision making. The only real path forward is wisdom.

Intelligence is not enough. We need to apply intelligence with the discernment that comes from awareness and compassion. Our purpose at Six Seconds is to support people to create positive change. Change that ennobles and empowers self and others. It’s the essence of leadership, and it’s urgently needed. While we must have cognitive power, people are not just rational: the missing link is emotional intelligence.

“Emotional intelligence is the missing link”

Follow me
Latest posts by Joshua Freedman (see all)
44 Comments