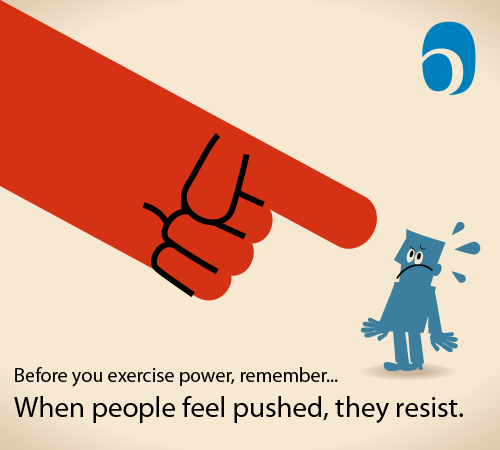 As social creatures — pack animals — we’re highly attuned to power and the dynamics of power in groups. Emotions of trust/distrust, acceptance/rejection, belonging/isolation are all connected to power.

Power-related feelings signal us about basic survival needs — who is a threat, who is an ally, who we can count on, and who is in the way.  The use of power is central to our interactions as leaders, coaches, parents, and change agents.  To be more effective, emotional intelligence will help us understand and tune up our own use of power and the ways people react to that.

Many Forms of Power

In “Western” societies we tend to think of power and force as synonyms, but actually we all have and exercise many forms of power. We can have huge strength even if we don’t have the power of force or money.

… Vaclav Havel wrote about “the power of the powerless,” which has overturned many governments since then. Recently visible in Tahrir Square, there is a deep well of power in the acknowledgement and acceptance of powerlessness — of being willing to let go of conventional “status” to belong to a group. A power of sacrifice.

… A client recently told me about a price negotiation, and the way his “opposite number” in the deal keeps using the tactic of delay and feigned confusion. A power of sluggishness.

… I heard a radio story today about accusations of torture by the Nigerian government to suppress environmental activists. A power of brutality.

… Our daughter doesn’t like it when Patty pushes her to get her work done, she gets sulky and stomps her feet… it’s exercising a particular form of power historically popular with adolescents: a power of petulance.

The emotional intelligence competency we call “Apply Consequential Thinking” (ACT) is at work as you answer these questions. As you consider the mix of powers available to you, doing the ACT evaluation lets you assess and choose the right tool for the situation. Are you using power efficiently, or do you need a more “green energy strategy” in your use of personal power?

One reason is “Josh’s basic rule of emotional intelligence” – which you’ve probably seen on other articles on 6seconds.org:

When people feel pushed, they resist.

This “push feeling” is not necessarily reasonable or based on fact. It may be completely “their own thing,” and not based on reality. But if the feeling is present, the feeling is more real than the reality. The “resist” can take a number of forms, it’s not necessarily a clear fighting back, for example, “resist” could mean undermining, withdrawing, rallying others, defending, attacking-to-defend, foot-dragging… whatever form it takes, it means the person is not on board and giving you their full energy and commitment.

It can be difficult to see some of the costs and benefits of various exercises of power — to be really effective in this analysis you also need to be attuned to your own and others’ feelings. It’s also powerful to consider the way you are supporting others’ use of power. Does your use of power reduce others’ by overwhelming or undermining? Or is your power support a healthy sharing which can reinforce and magnify one another’s success?

At work, especially with leaders who have many forms of power from position and role, it’s all too easy to become overly reliant on “raw” power, such as the implied threat, “If you don’t do what I want, it will hurt your career.” Dr. Robert Cooper, one of our wonderful Advisory Board members, sometimes asks leaders: If you didn’t have your job title and big office, would any one still follow you? In other words, if you did not have the power conferred by position, status and financial control, would you still have power?

For myself, when I use positional power or force, it’s usually because I’m impatient or afraid. “Raw” power seems more efficient, and when I’m stressed and overloaded, exerting force gives me a perception, probably an illusion, that I am in control and can make things happen. It’s also a way of claiming status. When I’m feeling anxious and unsure if I really do have power, I’m much more likely to attempt to exert force. In other words, when I am reacting to short term pressures and a feeling of urgency, I’m most likely to pull out the hammer.

I notice this quite literally when I’m trying to fix something around the house. I start very carefully, gently trying to align the parts or remove the little screws. Then I pinch my finger, or I’m running out of time, or I’m doubting myself, and I just whack the thing. Sometimes that works. Sometimes there the costs are high.

The point here is not to advocate for a certain form of power as better or more powerful. Certainly emotional intelligence will help strengthen relational power and increase influence. And sometimes EQ will help us see it’s time for force: there are moments where a strong “no” or an incontrovertible “yes” create more gain than does a nuanced discussion. But most importantly, when we use our emotional intelligence, we can see that every exercise of power has affects beyond what’s immediately visible. As you’re wielding the sword or the pen, take a pause to Apply Consequential Thinking — consider the results you really want, and use the power that will most smoothly and efficiently move the situation forward.

Follow me
Latest posts by Joshua Freedman (see all)
18 Comments