I hope you enjoy reading this blog post.
Want to improve your emotional intelligence? Click here for once-a-week inspiration.

What’s the difference of empathy vs. sympathy?

While they are often used interchangeably, there are crucial differences that lead to very different outcomes. “Empathy drives connection,” says social psychologist and bestselling author Brené Brown, “and sympathy drives disconnection.” Learn more about the difference of empathy vs. sympathy and get practical tips to increase your empathy.

What’s the difference between empathy and sympathy? Basically, emotion. Empathy means experiencing someone else’s feelings. It comes from the German Einfühlung, or ‘feeling into.’ It requires an emotional component of really feeling what the other person is feeling. Sympathy, on the other hand, means understanding someone else’s suffering. It’s more cognitive in nature and keeps a certain distance.

This hilarious RSA Animate, narrated by a clip from Brené Brown’s TED talk on empathy, highlights the difference perfectly:

Increase Empathy by Practicing All 3 Parts

There are 3 parts to empathy, which have more formal names but can be more easily understood as thoughts, feelings and actions. To truly practice empathy, all 3 are required:

1 Cognitive empathy – This is the thinking part. Imagining ourselves in a situation, and what it would be like. If we use this part without the next two parts of empathy, we slip into sympathy.

2 Emotive empathy – This is the feeling part. It’s standing shoulder-to-shoulder with that other person and feeling with them. It’s not above or apart from them, but together with them.

3 Empathic action – This is the most difficult part for me, and for many people. Because it actually means sitting in silence, not doing anything. Many people, myself included, default to offering some sort of solution, new perspective, or diversion – to do something. Do you know the common saying, “Don’t just stand there, do something”? Our coworker David Tubley says empathy is exactly the opposite: “Don’t just do something, stand there.” It sounds goofy but actually takes tremendous courage and vulnerability.

The temptation to “do something” is often a deeply ingrained pattern, though, so let’s take a look at some of the most common traps that derail people’s efforts to practice empathy:

1  Get your free 3 Parts of Empathy poster: 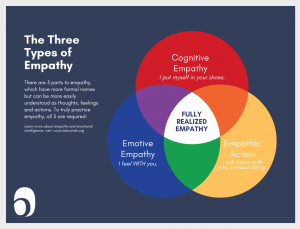 2   Use Empathy Cards to explore the meaning and practice of empathy.

Increase Empathy in the Six Seconds Model of EQ

The ‘At Least’ Trap

“Rarely does an empathic response begin with at least,” says Brown. Check out this Facebook interaction I came across the other day. Notice how a comment like this drives disconnection. The person says, “I’m sorry,” which is a good start, but then goes into comparing her suffering to her friend’s suffering. And the opportunity for empathy is lost.

In this context, this response seems ludicrous, right? And it is. But it’s also a really common way to respond to other people’s problems. It’s irresistible to try and put a silver lining on it, with but or at least. I know I am guilty of it. My excuse is that I am “helping them” see the bright side. And while that certainly has a place, when people are being vulnerable about a problem, it’s normally way more effective to just sit in the darkness with them.

Comment: “I am so sorry. I got a big bill for a kidney stone a few years ago and I can relate to that terrible feeling. I am thinking of you!”

Just a small difference and this comment now fuels connection. It puts them on the same team, with shared feelings. Instead of trying to fix it by offering a different perspective, the fix is to assure the other person that those feelings are valid and that they are not alone. That is what differentiates empathy vs. sympathy. 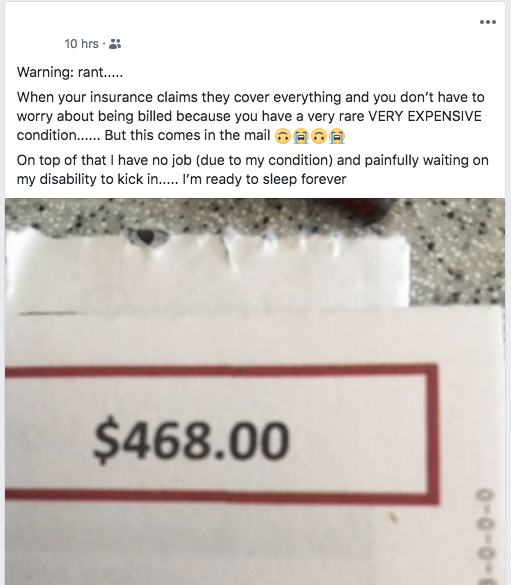 The ‘Promises You Can’t Keep’ Trap

My aunt Linda felt scared to death. She is an active retiree in her late 60s. She walks miles a day, takes classes at the community college, and is involved in local politics. A couple months ago she slipped and broke her hip, which required surgery. The months of immobility took an emotional toll, and the fear of falling again has affected her more than anything else.

She opened up to a number of friends, saying ““I’m really afraid of falling again.” And one of the most common responses? “… But you’re being so careful.” It’s meant to be comforting, but it really just invalidates her feelings of fear. And insinuates the original accident happened because of carelessness. A more empathetic response would be to simply nod and paraphrase back the feelings you heard: “It sounds like you’re really scared of falling again.” As Brené Brown says, “Rarely can a response make something better, what makes something better is connection.” It’s a beautiful challenge to simply sit with discomfort and the unknown. It’s okay to say: “It sounds like you afraid of falling again. I don’t know what to say, but I am here for you.”

Empathy vs. Sympathy: An Experiment to Try, and Resources to Learn More

Practice: Try this experiment, which I heard expressed by Josh Freedman, Six Seconds’ CEO: When someone’s expressing feelings, & you want to help them solve the problem… what if you just wait a bit? Listen more… affirm that those feelings are real. Accept: it is what it is. Only after all that, then ask: you want any ideas on what to do about it, or you got this?

7 Amazing Facts About Emotions You Should Know