Wangari Maathai, the Kenyan activist and first environmentalist to win a Nobel Peace Prize, liked to tell a story about a determined hummingbird:

A huge wildfire consumed the forest where the hummingbird lived, and as the fire raged, all the animals left the forest and stood watching, transfixed and overwhelmed. They all felt so overwhelmed that they did not do anything, but the hummingbird decided, ‘I am going to do something about the fire.’ So it flew to the nearest stream, got a drop of water in its beak, and dropped it on the fire. Then it went back again, and again, dropping water on the fire as fast as it could. The other animals mocked the hummingbird, saying, ‘What are you doing? You are too small, your wings are too small, and the fire is huge.’ The hummingbird turned to them and said, ‘I am doing the best I can.’

Our world, like the animals’ forest, is being consumed by a huge fire. As most people stand by and watch, we’re in desperate need of a generation of hummingbirds “who are willing to stand up for what is right even if they are the only ones doing it,” says Wanjira Maathai, Wangari’s daughter and the Chairwoman of the Wangari Maathai Foundation, whose mission is to honor her legacy by inspiring the next generation of courageous leaders.

In honor of that goal and Wangari Maathai’s favorite story, the foundation recently launched the Hummingbird Leadership Project – a personal leadership and character building program for preteens and teens designed to inspire a new generation of principled citizens and activists in Kenya. The Foundation designed the program in collaboration with Jacaranda Designs and Educare.  In collaboration with Premier Training Services and Six Seconds, the Wangari Maathai Foundation is implementing an impact assessment tool to measure the effect of the Hummingbird Leadership Project, bringing together a phenomenal team of change makers to create a multi-generational solution to a complex problem.

Kenya, and in a sense all of Africa, may just be the perfect place for this type of innovative program. It represents both the stunning opportunity and intense challenge of changing humans’ relationship with the environment.

Wangari Maathai Foundation Inspiring a Generation of ‘Hummingbirds’ for Our Future

Kenya’s environmental laws are actually quite strong, at least on paper. The country has had life sentences and fines of up to US$200,000 for the illegal killing of endangered or threatened species since 2013, under its Wildlife Conservation and Management Act. And they recently passed a law that now includes capital punishment for environmental offenses. Tourism and Wildlife Minister Najib Balala says this is because existing deterrents against killing wild animals in the east African nation are insufficient. Wanjira, however, says the problem runs deeper than that.

“We’re facing a values and personal leadership crisis in Kenya,” Wanjira says. “We have too many people who have no clear values, or selfish values, that govern the decisions they make.

A recent study by the Aga Khan University’s East African Institute found that 73% of Kenyans admitted that they are afraid to stand up for what they believe in for fear of retribution, and 50% considered corruption to be a legitimate way of doing business. It’s alarming.” It shows on a macro level, too. Transparency International’s latest Corruption Perceptions Index rated Kenya 145th out of 176 countries. And this combination of fear, greed and apathy has led to widespread environmental destruction and an erosion of democratic values. It’s a problem that, while potent in Kenya, exists all over the world.

What makes the situation unique and potentially explosive in Kenya, and in the rest of Africa, is the demographics  of its population. That same study found that 80% of Kenyans are under the age of 35. “We’re at a crossroads,” Wanjira says. “If we sit back and do nothing, we are headed for unprecedented environmental destruction among other challenges. But it’s also an incredible opportunity to change the course of our country.”

A recent study found that 73% of Kenyans admitted that they are afraid to stand up for what they believe in for fear of retribution, and 50% considered corruption to be a legitimate way of doing business. These are the real roots of the environmental crisis.

Professor Wangari Maathai founded the Green Belt Movement in 1977, an environmental organization that empowers communities, particularly women, to conserve the environment and improve livelihoods. A simple but powerful principle has driven that movement: Concerned citizens cannot sit around and hope that the government or some other entity is going to solve the environmental crisis, or the epidemic of corruption, alone. Change starts within. Change starts by developing the internal capacities of individuals, who then take action in their families and their communities. That means developing emotional intelligence skills like empathy, courage and resilience.

“Underneath it all, when you cut through all the confusion, it is these social emotional skills – or a lack thereof – that are responsible for the biggest and most important challenges of our time,” Wanjira Maathai

In Kenya’s public schools, though, like in most schools throughout the world, this type of social emotional learning is often under prioritized or treated as a second class citizen in the classroom. The focus is almost exclusively on sharpening cognitive skills and not on non-cognitive skills like empathy, integrity, and confidence.   Because of this, according to Wanjira: “We are churning out one dimensional graduates.. But we are not speaking to the non-cognitive skills which are the crucial elements of people that drive behavior more than anything else.”

The Hummingbird Leadership Program has been designed to fill that gap.  The Foundation has anchored the program on eight core SEL values that exemplify the life and work of Professor Wangari Maathai: Courage and Confidence, Integrity and Honesty, Commitment to Excellence, Creativity and Resourcefulness, Resilience, Gratitude, Service to Others, Responsible Stewardship

“It’s a personal leadership and character building project, equipping young people with the tools and skills they need to meet the challenges of the future, to create opportunities for themselves, and to create what we’re calling islands of integrity,” Wanjira says. The ultimate goal is to create a nation, and a world, full of hummingbirds who are doing their part.

The program launched in 4 pilot schools in October 2018.

Mucha Mlingo understands the value of speaking to emotions to change behavior. She founded Premier Training Services, a human capital development company in Nairobi that specializes in teaching emotional intelligence. Mucha met Wanjira Maathai at the school their children attend and they bonded talking about the importance of emotional intelligence skills

“This project is so necessary because the foundation that children have is key! When we start earlier, we are more likely to change how people behave,” Mucha says. “If these emotional intelligence skills can be embedded in children at a young age, that is the best place to start.” As the Swahili adage says, ‘Samaki mkunje yungali mbichi’, which means ‘bend the fish while it is still fresh.’

As they discussed the Hummingbird Leadership Program, then in its initial stages, Mucha asked a question that, unbeknownst to her, had been on Wanjira’s mind for quite some time: “How are you going to measure impact? How are you going to tell if your program is successful?” Wanjira responded that measuring the program’s impact had been one of the foundation’s concerns as they went through the early planning stages and conducted their risk assessment. When Mucha told her that PTS had just become a Preferred Partner of Six Seconds, a nonprofit that produces assessment and training tools to teach emotional intelligence to children and adults, Wanjira’s eyes lit up. With Six Seconds’ tools, the Hummingbird Leadership Program could measure children’s emotional intelligence before and after their high-impact training programs. They could measure exactly how much the project succeeds in moving the needle.

“Our paths crossed at the perfect time,” Mucha said with a smile.

For Generations to Come: Igniting Emotions

Since Mucha and Premier Training Services had never worked with children before, she and Wanjira decided to set up an EQ café to explore the concept of emotional intelligence with kids. “We used our own kids as guinea pigs,” Mucha told me with a laugh.

The café, according to Wanjira, exceeded their wildest expectations: “The kids were amazed. They were motivated. They were inspired. They were engaged. Their personalities emerged in ways we had never anticipated. The kids wouldn’t stop talking about how exciting it had been, and the kids’ parents asked us when the next one would be. And so began this relationship between Mucha and I, and we begun to look at how we could continue to work together and build this program.”

Mucha reached out to Jayne Morrison, Six Seconds’ Regional Director for the Middle East, Africa & India, to ask for help in developing the curriculum. Jayne readily agreed: “So much of the project – the 8 values that are the foundation of the Hummingbird Program – mirrors our values at Six Seconds. It’s a really exciting collaboration.”

With leadership from Six Seconds and Premier Training Services, Wanjira and her team launched the impact assessment tool in 4 pilot schools in October, 2018. The program goes beyond EQ assessments and training for the students, and includes emotional intelligence workshops for teachers and parents as well.

Wanjira hopes that this is only the beginning of a beautiful journey: “We made a very deliberate decision to anchor the program within the framework of the current Kenyan Curriculum” Wanjira says, “so that it’s a core part of the kids’ education and readily available to any school that wants to participate.”

To understand the bigger picture implications of this program, it would be hard to do better than with the words of the late Wangari Maathai herself:

Wangari’s little thing was planting trees, and she believed that if all of us had a little thing, then together, we could make the world a better place.

Here’s what Oprah has to say about it: 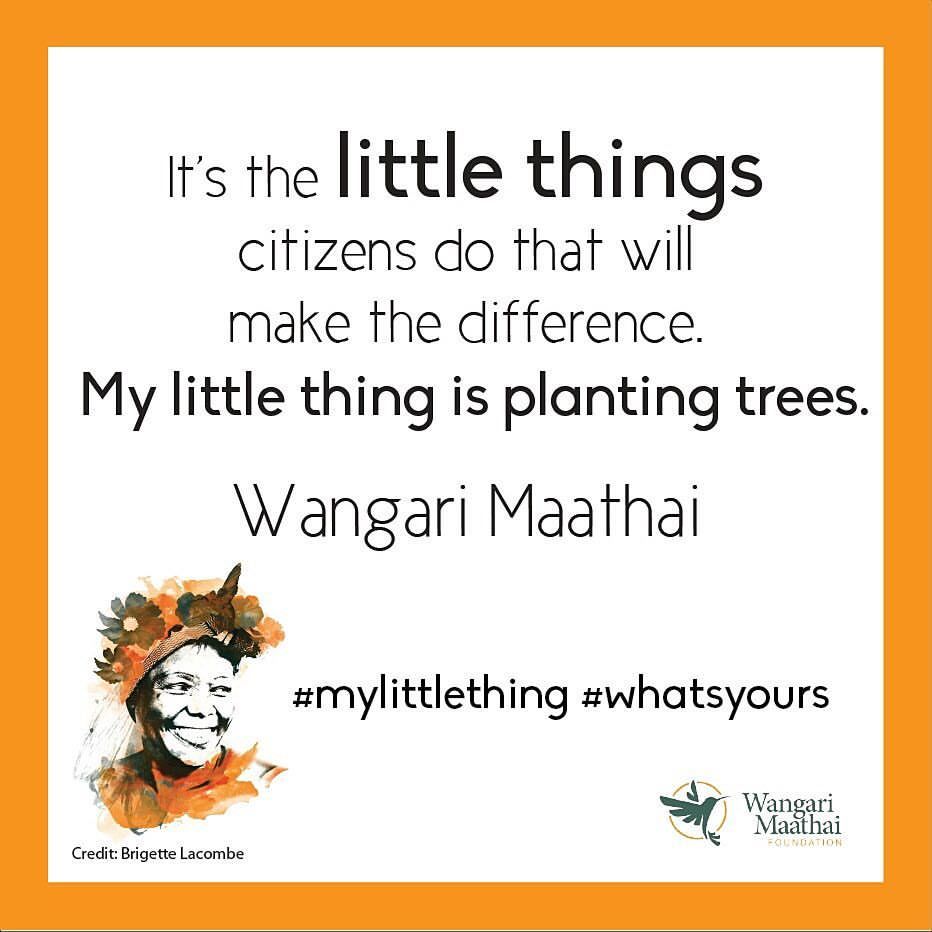 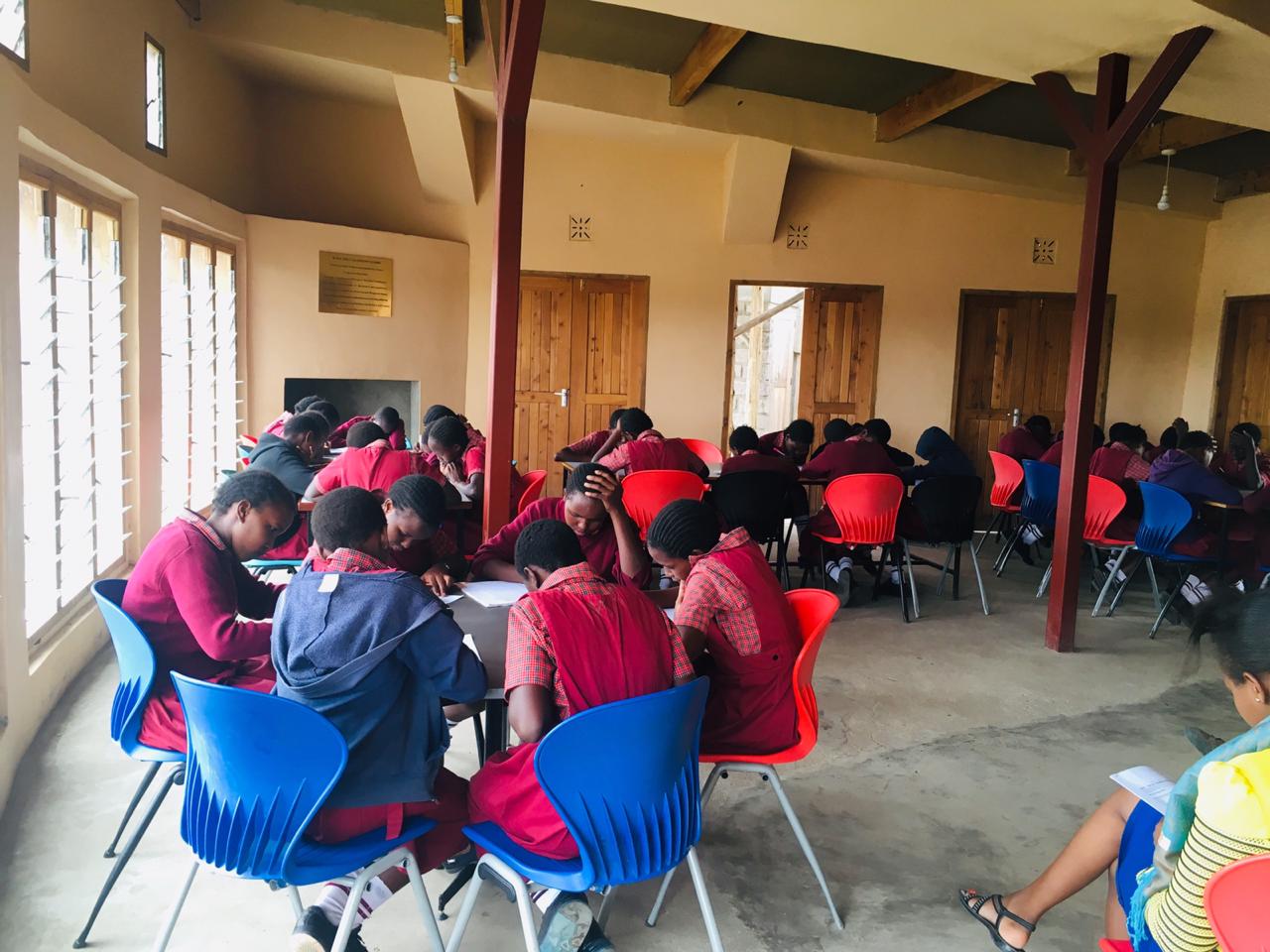 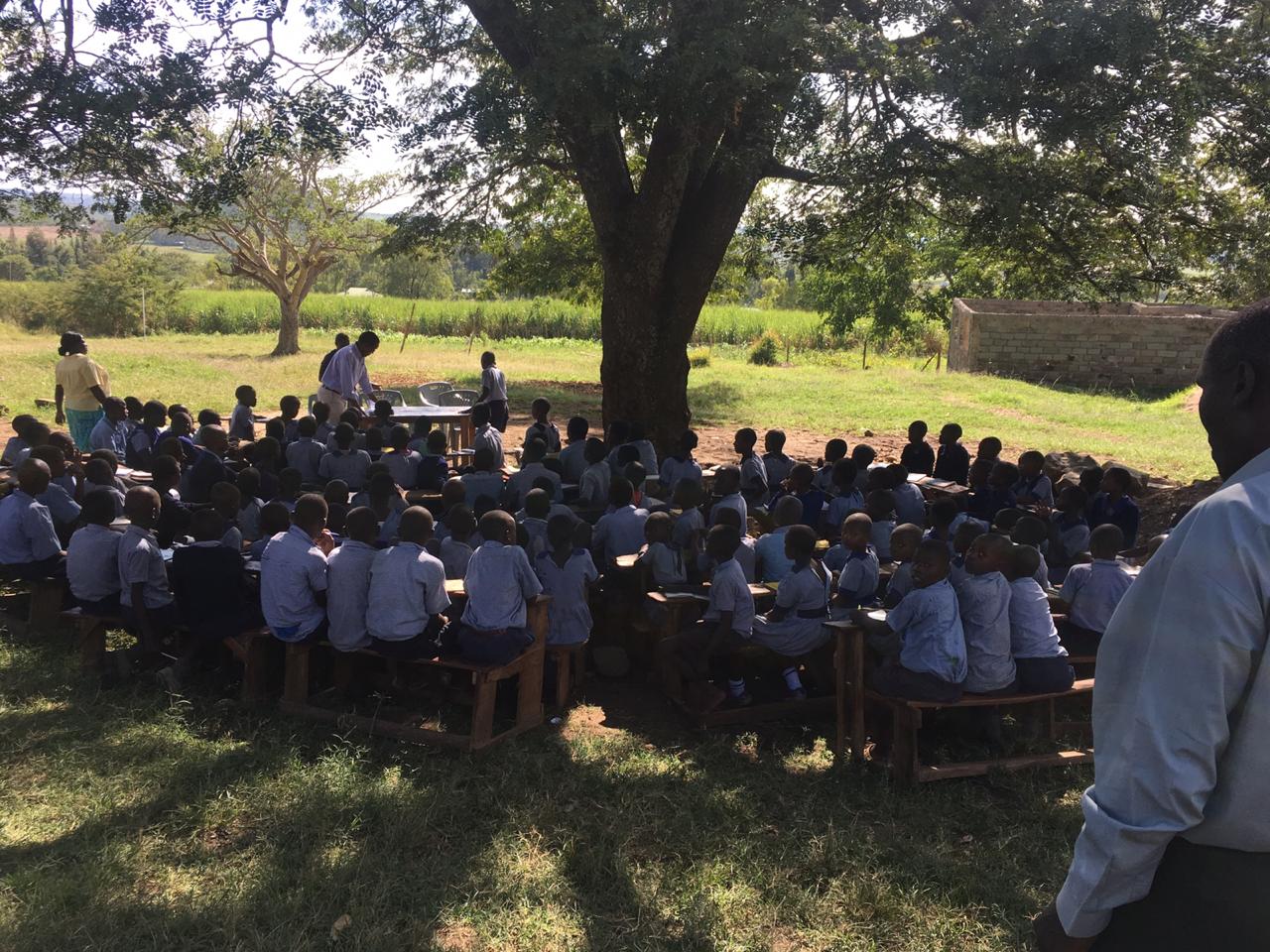 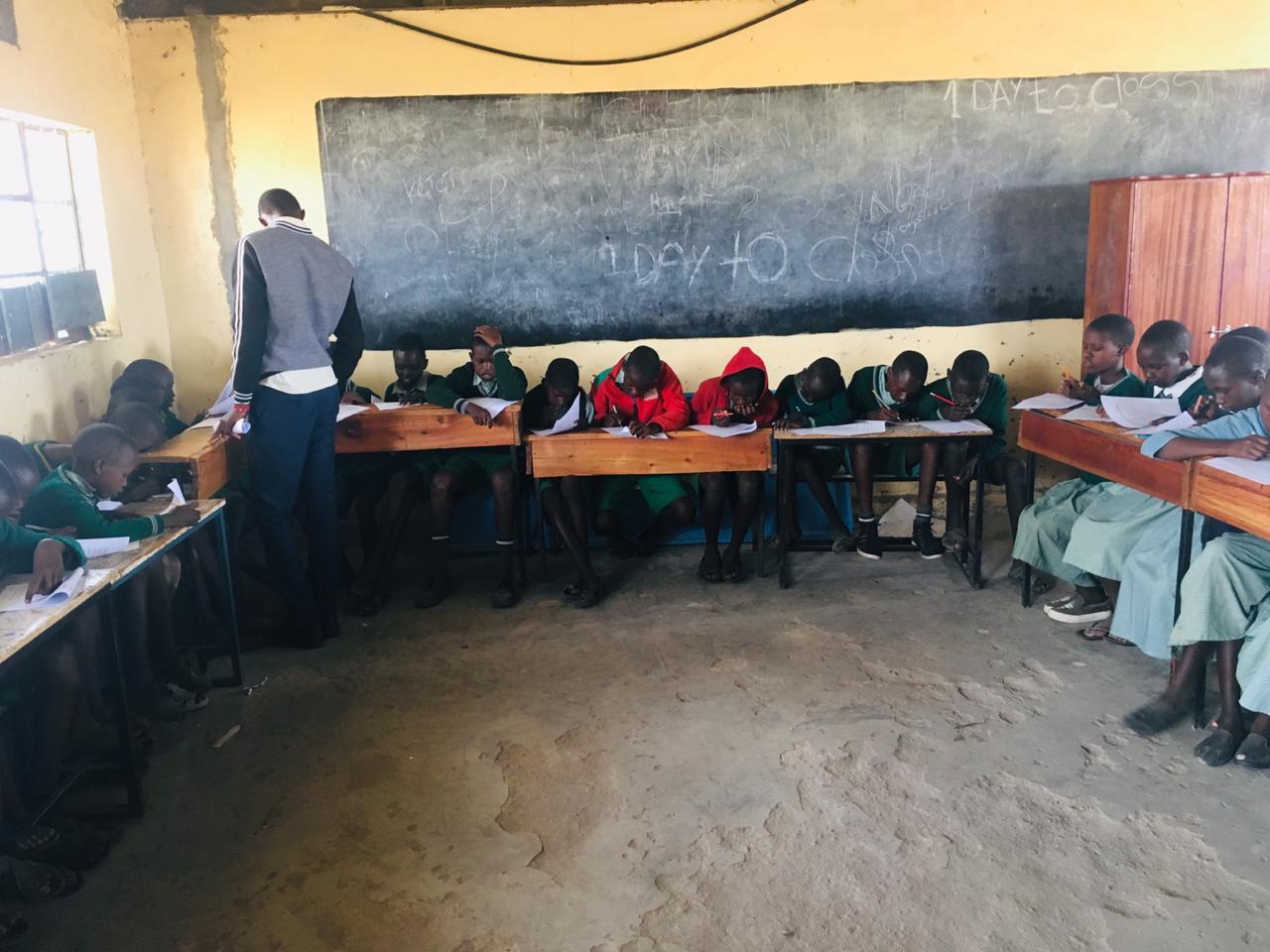 A “visitor” outside the school when the children were working on the assessment: 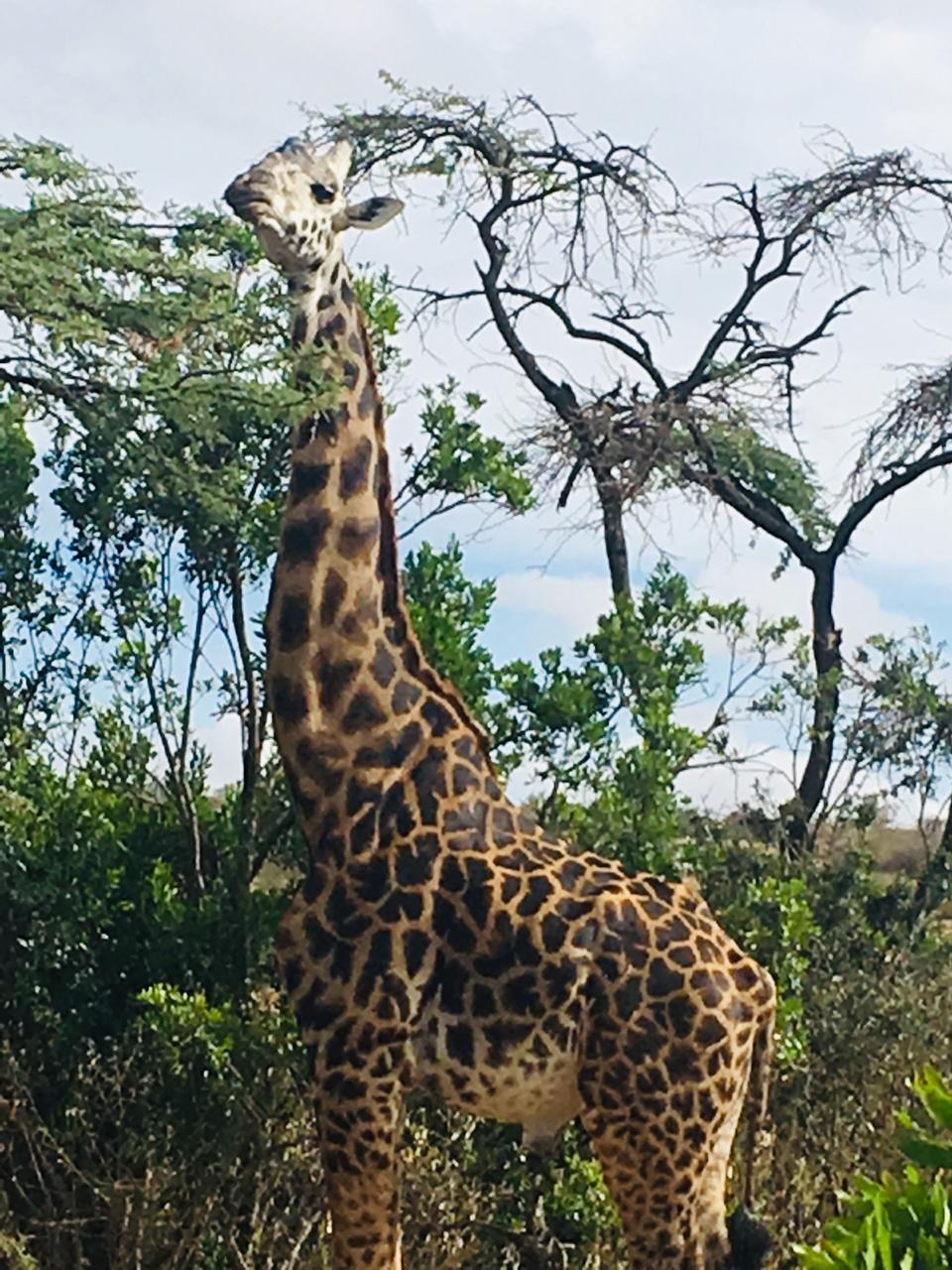 For a better future, build a stronger foundation for children by embedding emotional intelligence skills. @MuchaMlingo

Work continues on the “Greenbelt”

Leadership begins by connecting head and heart – it’s a long journey, so the younger people start, the better. @MorrisonJayne

“The future of the planet concerns all of us, and all of us should do what we can to protect it. We often preoccupy ourselves with the symptoms, whereas if we went to the root cause of the problems, we would be able to overcome the problems once and for all.” [email protected]