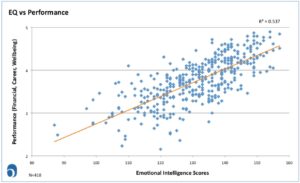 The United Arab Emirates is emerging as the business capital of the Middle East. In this complex, demanding environment, to what extent do the “soft skills” of emotional intelligence matter? In a study of 418 leaders living in the region, there is a very strong relationship between emotional intelligence skills and performance outcomes. Scores on the SEI (Six Seconds Emotional Intelligence Assessment) predict over 53% of the variation in critical professional and personal success factors (such as effectiveness, influence, relationships, and career status). This means that if you want to get ahead in the Middle East, emotional intelligence is one of the most important capacities to develop. A pdf version of the report and summary slides are available for download by Joshua Freedman, Jayne Morrison, Andreas Olsson Research: Publication August 6, 2010. Rev 1/1/17.

There are numerous studies documenting the relationship between emotional intelligence and various aspects of performance, but this is one of the first studies of this kind in the Middle East. The UAE, one of the region’s business centers, is the base for a wide range of businesses led by an incredibly diverse mix of leaders from all over the globe. This study was conducted by Six Seconds (global) and Six Seconds Middle East in partnership with Dubai Knowledge Village (DKV), the region’s first and largest center for human resource management professionals. Focused on Human Resources, Learning, and Leadership, the 450 business partners form part of a long-term economic strategy to develop the region’s talent pool and accelerate its move into a knowledge-based economy. DKV is part of TECOM Investments, a subsidiary of Dubai Holdings, one of the major economic engines of the region.

The invitation to participate in this study was sent by email to CEOs, General Managers, Executives, Managers and Leaders based in The Middle East by Dubai Knowledge Village as well as to those on the Six Seconds Middle East mailing list. The 418 individuals who responded by taking the assessment and performance survey range from entry-level managers to senior executives from a wide variety of organizations. The sample group is 41% female and 59% male, ranging in age from 18-63 years (mean age is 35 years); 91% hold university degrees. The roles represented are:

The sectors represented are:

Participants live in a variety of countries in The Middle East and represent 51 different nationalities reflecting the wide cultural diversity of the region. The most frequent nationality groups in the study include:

The Performance scale was developed from a questionnaire Six Seconds has used for previous research[2] and expanded for the purposes of this study. Using a 5-point Likert scale respondents rated themselves on 42 items related to: 1. Effectiveness (completing the right work in the right timeframe) 2. Influence (engaging others in ideas) 3. Decision Making (accurately evaluating options) 4. Career (growing professionally, both in skills and revenue) 5. Relationships (building mutually supportive alliances) 6. Finance (creating prosperity) 7. Health (maintaining physical and mental fitness) 8. Quality of Life (living in a fulfilling manner) 9. Family (developing caring and connected relations)

Respondents are asked to rate their agreement with a series of statements, such as, “My choices are effective,” “People come to me to get the job done,” “I have a strong network,” “My career is progressing smoothly,” and “I am financially secure.” The 42 items form a combined variable called “Performance,” with a Cronbach alpha of a= .91 indicating high scale reliability. The nine sub-scales of the performance questionnaire have Cronbach Alphas ranging from .57 to .83, indicating that some subscales are effective independently while others are only statistically meaningful in combination with the whole.

A high correlation appeared between the emotional intelligence (EQ) scales and the performance outcomes. As shown in this graph, there is a strong positive relationship between EQ and Performance. Generally speaking those with higher EQ had higher Performance scores: 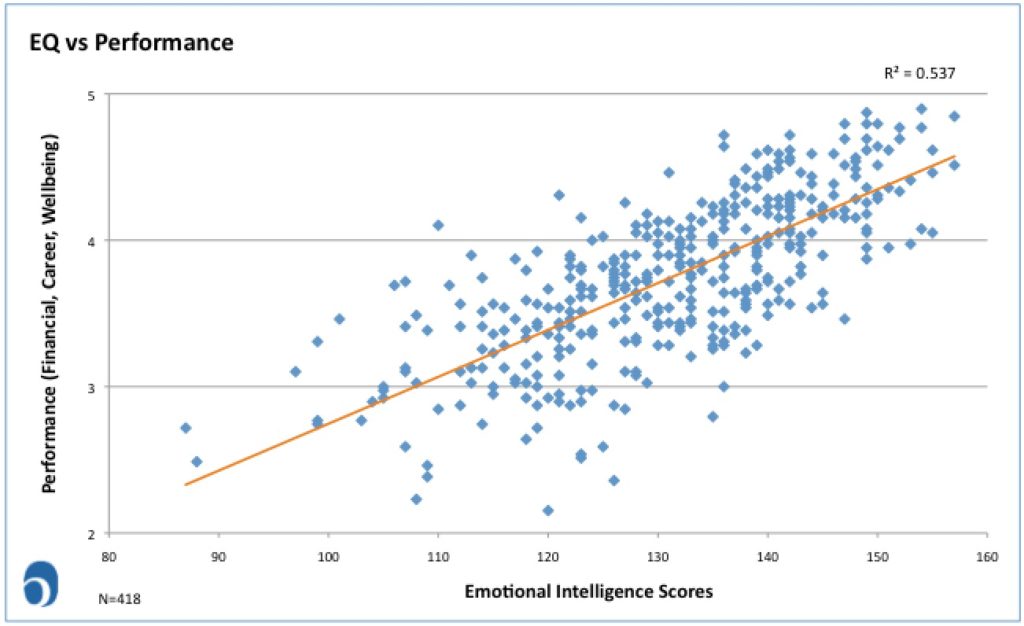 To assess the strength of the relationship, a linear regression analysis found in this sample, EQ is a strong predictor of the Performance variable:F(8) = 73.22,p< .001(R square = .54).

In other words, over 53% of the variation in Performance among these Middle East leaders is explained by emotional intelligence.

To further understand the relationship between EQ and Performance, several of the Performance subscales were examined separately. This table shows the name of the scale, the Cronbach alpha[3], a sample item from the scale, and the R-squared value in percentages.[4]

Six Seconds is a 501(c)3 organization based in California (USA) with offices in Amman, Bologna, Brisbane, Beijing, Dubai, Kuala Lumpur, San Francisco, and Singapore. Established in 1997 Six Seconds is a global organization supporting people to make a positive difference – everywhere, all the time. Six Seconds teaches the skills of emotional intelligence so leaders, team members, educators, children, parents, and change agents make better decisions — decisions that are life sustaining and make places where people can be and do their very best. For more information, please visit: www.6seconds.org

Focused on Human Resources, Learning, and Leadership, the 450 business partners at DKV form part of a long-term economic strategy to develop the region’s talent pool and accelerate its move into a knowledge-based economy. DKV is part of TECOM Investments, a subsidiary of Dubai Holdings, one of the major economic engines of the region. For more information, please visit: www.kv.ae

[1] The only tool based on Six Seconds’ model, the SEI is focused on developing key capacities for living and leading with emotional intelligence. (www.6seconds.org/sei)

[3] Cronbach Alpha is a measure of the internal consistency of the scale; numbers from .55-.65 represent moderate consistency, .66 and higher represent good scale consistency.

[4] R-squared is a measure of one variable’s capacity to predict another variable; the higher the percentage, the more closely the two variables will cluster. A higher R-squared indicates a stronger relationship; 1, or 100%, would mean a perfect match between the two variables.

Follow me
Latest posts by Joshua Freedman (see all)
5 Comments