Matt had dejavü as he heard the same speech from his doctor that he’d heard for years:

“Your blood pressure is too high. You’re at risk for heart disease and stroke. You really need to lose weight, and quit smoking.”

They’d been having this same conversation every year for a decade. Matt knew he should change, but he hadn’t. He felt frustrated. His doctor felt frustrated to be giving the same speech he gives to so many patients, and it rarely seems to sink in.

It’s a widespread problem: According to the United States’ Center for Disease Control, lifestyle changes could reduce the death rate by up to 40%. Just by making different choices! But once again, while patients like Matt know they should exercise more, eat healthier and avoid tobacco, finding the motivation to make those changes and stick with them is a lot harder than it sounds.

Coaching is a process of change, and the bad news is that it’s hard — even when clients & coaches are committed, most change efforts fail. The good news is that research has found the counseling technique of Motivational Interviewing to be a remarkably effective way of talking about change – and, ultimately, making it stick.

What Is Motivational Interviewing?

Motivational interviewing is a counseling method designed to help people make different choices by finding the internal motivation to change their behavior. Dr. Bill Matulich, a clinical psychologist in San Diego, California who has been teaching MI for decades, defines it simply as “an effective way of talking with people about change.”

A solid body of research supports Dr. Matulich’s assessment that MI is effective, at least in certain contexts, like Matt’s. A recent meta-analysis of 72 clinical trials found MI to have a significant and clinically relevant effect in 75% of the studies for behavior changes like quitting smoking, decreasing alcohol use, and losing weight – areas with traditionally low success rates.

Get Your Free Motivation Guide 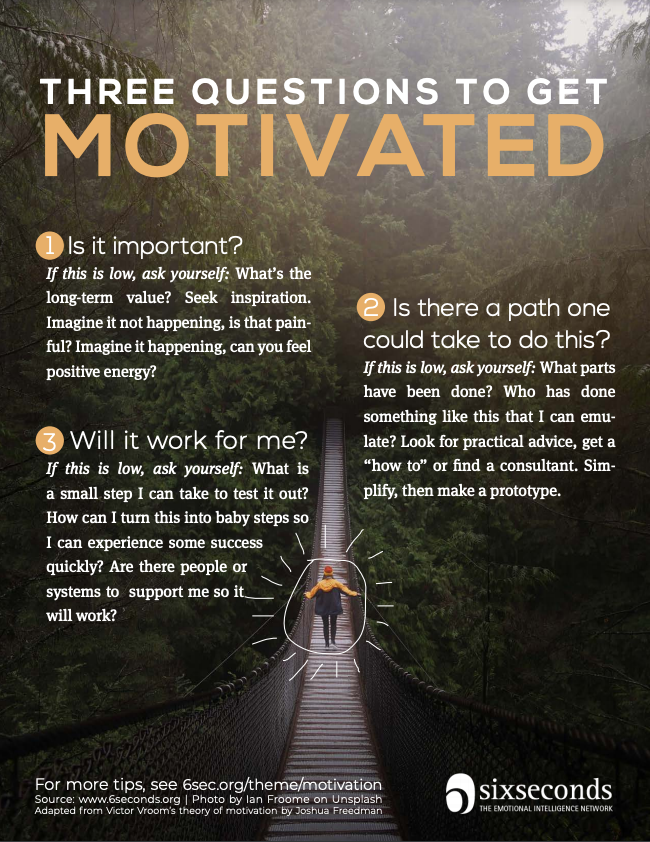 Why Would Coaches Use Motivational Interviewing?

Traditionally, an expert gives advice and assumes that people will change their behavior once they have information indicating they should. It’s a top down approach, and it encourages passive listening on behalf of the client. Normally, the motivation is completely extrinsic: “My doctor told me I have to…”
The problem? Most people already “know” they should make changes – eat better, quit smoking, etc. The problem isn’t a lack of information; it’s a lack of sustainable motivation.

Motivational interviewing tackles this root issue head on by encouraging clients to talk about their need for change and their own reasons for wanting to change. The goal is to elicit that person’s intrinsic motivation, which Six Seconds’ research has found to be the emotional intelligence skill most highly predictive of good decision making.

What emotional intelligence skill is most strongly correlated with good decision making? Engaging intrinsic motivation. How can you help your clients do that?

1. Ask open questions – Instead of giving a client a diet and telling him it’s important to follow it, the coach may ask: “What do you think is going well with your eating?” Or, “What strategies have worked for you in the past?”

2. Express empathy – The coach might say, “I understand that it has been difficult for you to exercise and lose weight in the past. Many of my clients find this to be difficult. I think it is still important for us to try to find ways for you to work on this.” This is the emotional intelligence skill of increasing empathy.

3. Offer positive feedback – Affirmation is a crucial part of motivational interviewing. If the coach asked, “What strategies have worked for you in the past?” the client may tell him about a time in the past when he ate healthily or exercised regularly, but then fell off. The coach should affirm the value of that effort or any ongoing efforts that come up: “This is hard work you are doing.”

4. Elicit intrinsic motivation – Instead of telling the client that he should quit smoking and lose weight, his coach could ask questions that help him think about the problem – and what could be done – in different ways. A few examples include:

These are just a few questions of many that a coach could ask. But there is a fundamental truth behind it all: When clients develop the plan, it’s more successful.

For more questions, check out this document on Motivational Interviewing from the Rudd Center at the University of Connecticut.

5. Reflect back thoughts and feelings – Understand what the patient is thinking and feeling, and then say it back to them. If the client says he eats junk food at night when he watches TV and he wants to stop, the coach could say back, “Eating junk food as you watch TV is one thing you’d like to change.”

Core principle for Emotional Intelligence Coaches: We walk beside our clients, it’s THEIR journey to their goals

6. Have the client connect the dots. Ask the client to summarize and come up with solutions: “So you said you want to live long enough to see your grandchildren. What are the key points we discussed about how you might make that happen?”

7. Roll with resistance – When clients express reasons for not achieving goals, the physician can help them find ways to succeed. If the client says, “I just always gain the weight back after I lose it,” the coach could say, “That is a common problem. What would make you more confident about making these changes stick?” This is closely related to the EQ skill of exercising optimism – helping people see there are many options even when they can’t see them.

8. Make it personal — Research on change shows that whether in healthcare, clinical counseling, or coaching: personal relationships are the basis for change. Rather than offering generic advice, “I tell all my clients to use this app,” specifically link action steps to the client’s needs. “You said it was important for you to be outside more often. What is a way to do that you think would work for you?”

Core principle for Emotional Intelligence Coaches: We walk beside our clients, it’s THEIR journey to their goals.

The principles of motivational interviewing are embedded in EQ Coaching. If you want to be more effective in supporting change, grow your expertise with Six Seconds, the originators of EQ Coaching. Here’s an overview of the program.