Based on psychology experiments from Canada, Israel and the United States, 3 simple techniques to overcome common decision making pitfalls

Have you ever heard of Solomon’s Paradox? It’s people’s tendency to think more wisely about other people’s problems than their own. And a pair of researchers set out recently to test this hypothesis and see if there is any truth to it – and sure enough, it’s real.

To test it, two researchers at the University of Waterloo had participants in long-term relationships imagine one of two scenarios: either that they had been cheated on or that their best friend’s partner had cheated on their friend. Then they answered questions aimed at measuring aspects of wise reasoning – like recognizing the limits of one’s knowledge, considering others’ perspectives, and searching for compromise. The participants who imagined their friend being cheated on scored higher on all of the above than the participants who imagined themselves being cheated on. Solomon’s Paradox appeared to be true. People could reason more wisely about other people’s problems.

But then the researchers took it a step further, asking themselves: Is it possible to help people distance themselves from their own problem and think about it like they would a friend’s problem?

To test this question, they ran the same experiment with new participants. They had the participants imagine themselves – or their best friend – being cheated on. But this time they instructed half the participants who were imagining their own personal dilemma to think about it from a third-person perspective – as if they were looking in on their own life. And those participants scored higher in wise reasoning than those who thought about it from the typical first-person perspective, and their scores were indistinguishable from those who thought about their friend being cheated on in the first experiment. The researchers found the same pattern of bias and the same benefits of third-person perspective taking for all different age groups and genders.

So to make better decisions, pretend like you’re making them for a friend or that you’re observing your own life from an outside perspective. You can download a free worksheet that walks you through this self-distancing process by clicking on the button to the right.

People have a tendency to be better at making decisions for their friends than for themselves. But a little guided imagination can turn that wisdom inward, per research from Canada

Give yourself at least 3 options

In the quest to make better decisions, it’s often overlooked that we have a tendency to box ourselves in. Or, to say it with a positive bent, we haven’t fully honed our ability to see all the options that we really have. It’s the skill of exercising optimism, which research keeps finding to be a learnable skill with amazing benefits. Dr. Therese Huston, decision making expert and author of How Women Decide, said it beautifully in an interview with Harvard Business Review: “The primary problem is that we don’t realize how narrow our view is. And the fact that we’re too narrow in our view, because that’s where we’re looking, we don’t notice that there are other places that we could be looking. We don’t realize that we could pivot and have some very different options within our view.”

A good rule of thumb is to have three options, she says. “All too often we only give ourselves one option and we fool ourselves into thinking it’s actually two. Should I do this or not? There’s really only one option on the table – I’m going to make this change or I’m going to stay put. And if you give yourself three options – let’s take a business example. Your company’s thinking about building a parking garage. So instead of just, should we build a parking garage or not, three options would be, should we build a parking garage, should we give all employees bus passes, or should we give our employees the option to work from home one day a week?” Even just the process of brainstorming gets us thinking outside the box. Research from Ohio State University has found the quality of our decisions goes way up when we generate more options.

To make better decisions, give yourself more options… as a general rule of thumb, think of at least 3.

Generating at least 3 options leads to better decisions, per research at Ohio State… Check out this parking garage example. Can you see why it works so well?

Examine the lens you’re looking through

We don’t often realize how much our decision making is impacted by circumstances we’re either not aware of or very peripherally aware of. Studies show that things like a person’s environment, mood, and physiology impact how they perceive the world and the decisions they make. The antidote to this tendency is self-awareness – a deeper understanding of how different situations and feelings tend to “color our glasses.”

It can be something as simple as the brightness of a room. Research from the University of Toronto found that bright lights seem to amplify people’s emotions, both positive and negative. In a series of experiments, researchers put study participants under different lighting conditions as they rated various things, such as the attractiveness of someone, the spiciness of a sauce, and their feelings toward positive or negative words. And they found that the brighter the lights, the more intense the emotions toward all the above. Participants rated the sauce as spicier, the people as more attractive, and negative words as more negative than participants in dimmer rooms.

And our mood – the brightness or darkness of our internal world – is just as powerful in “coloring our glasses.” Let’s take a look at the basic emotions of feeling mad, sad, glad and afraid – and how they tend to influence the decision making process. But before we look at the research, consider: When you’re angry, how do you think that would impact your decision making process? Would you be more impulsive or more analytical? What about sadness? Or fear?

According to research, here are the tendencies:

Anger tends to instill confidence and make people more eager to act. Angry people are more likely to take risks and minimize the potential damage of those risks. Sadness tends to foster systematic thought: “on the one hand x, but on the other hand y.” Sad people are more likely to evaluate and compare all the options. Fear tends to limit the options that we see. When our amygdala is activated, our brains can only choose options based on our previously stored patterns. Happiness could possibly make people more gullible. According to a number of studies, happy people are more likely to put faith in the length of a message, or in the attractiveness or likability of the source, rather than its quality.

It’s not like anger is bad for decision making and happiness is good. The key is understanding that different moods do influence decision making – and how they tend to influence it. That awareness helps us make truly informed decisions.

Similarly, our physiology influences our decision making. This shouldn’t come as a surprise since hunger, for instance, activates many of the same bodily systems, like the autonomic nervous system and hormones, that are involved in emotion. In an alarming study from Israel, researchers found that parole boards were strongly influenced by the time of day and possibly how hungry they were – and they didn’t even know it. The later in the day it got, the less likely they were to grant parole. Similar studies have found unconscious bias in the grading of college essays by college admissions officers in the United States – the scores they gave varied greatly based on the time of day when they grade the essays. These studies both further stress the point that the world isn’t as static or objective as we tend to think – our perceptions are influenced by a number of internal and external factors. To make better decisions, it’s essential that we are aware of these potential biases and do what we can to correct for them. Be aware of your emotional state and how that may impact your decision. Think about your surroundings and how they may subtly influence you. Make sure to not make big decisions when you’re hungry, tired, or late in the day. And for really important decisions, think about them and write down your thoughts several different times, in different environments.

There’s a simple 3-step process for making decisions with self-awareness based on the Six Seconds Model of Emotional Intelligence. You can download a free worksheet by clicking on the button to the right that walks you through the process.

Considering we make tens of thousands of decisions every day, there is a hardly a process that could be more beneficial to master.

Try out these strategies and let me know how they work through email or by posting in the comment section. Thank you!

Here’s a free worksheet with a 3-step process to go through to make better decisions with emotional intelligence.

Check out these recent articles on emotional intelligence

What's the connection between wellbeing and racism? Can the skills and practices of emotional intelligence support us to build ...

IQ vs. EQ: Why it matters what we measure

The progress and problems that define the Digital Era are the logical conclusion of 100 years dedicated to cognitive intelligence. What

Is education the path to a just and equitable society, or part of systematized racism - or both? If all change starts within, then how ... 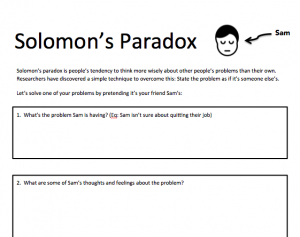 Think of a problem you’re facing. Research suggests that if you can distance yourself from the situation, you can reason more wisely about the situation and what to do.

This worksheet is designed to help you overcome Solomon’s Paradox and unleash your inner wisdom by looking at the situation from an outside perspective. Just fill in the form and we will send you an editable version of the worksheet.

Fill in this form to receive your FREE Know Yourself, Choose Yourself, Give Yourself Worksheet: 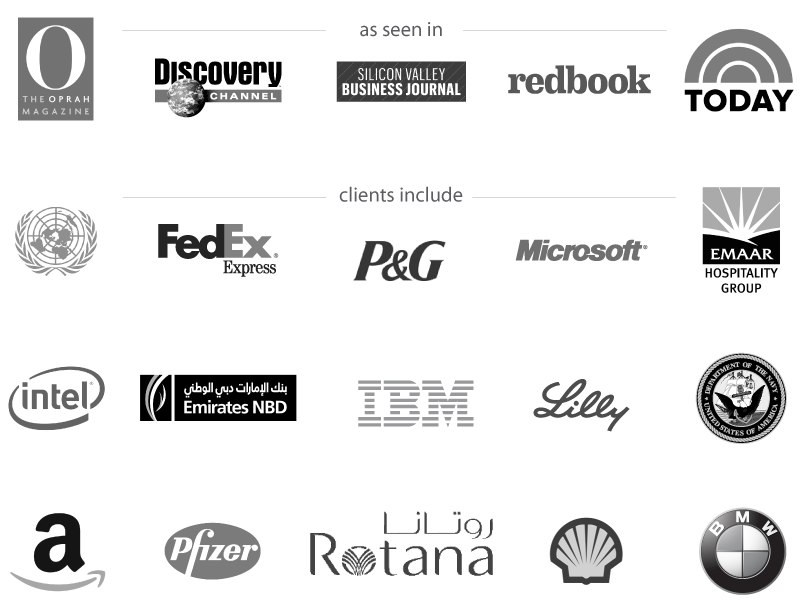 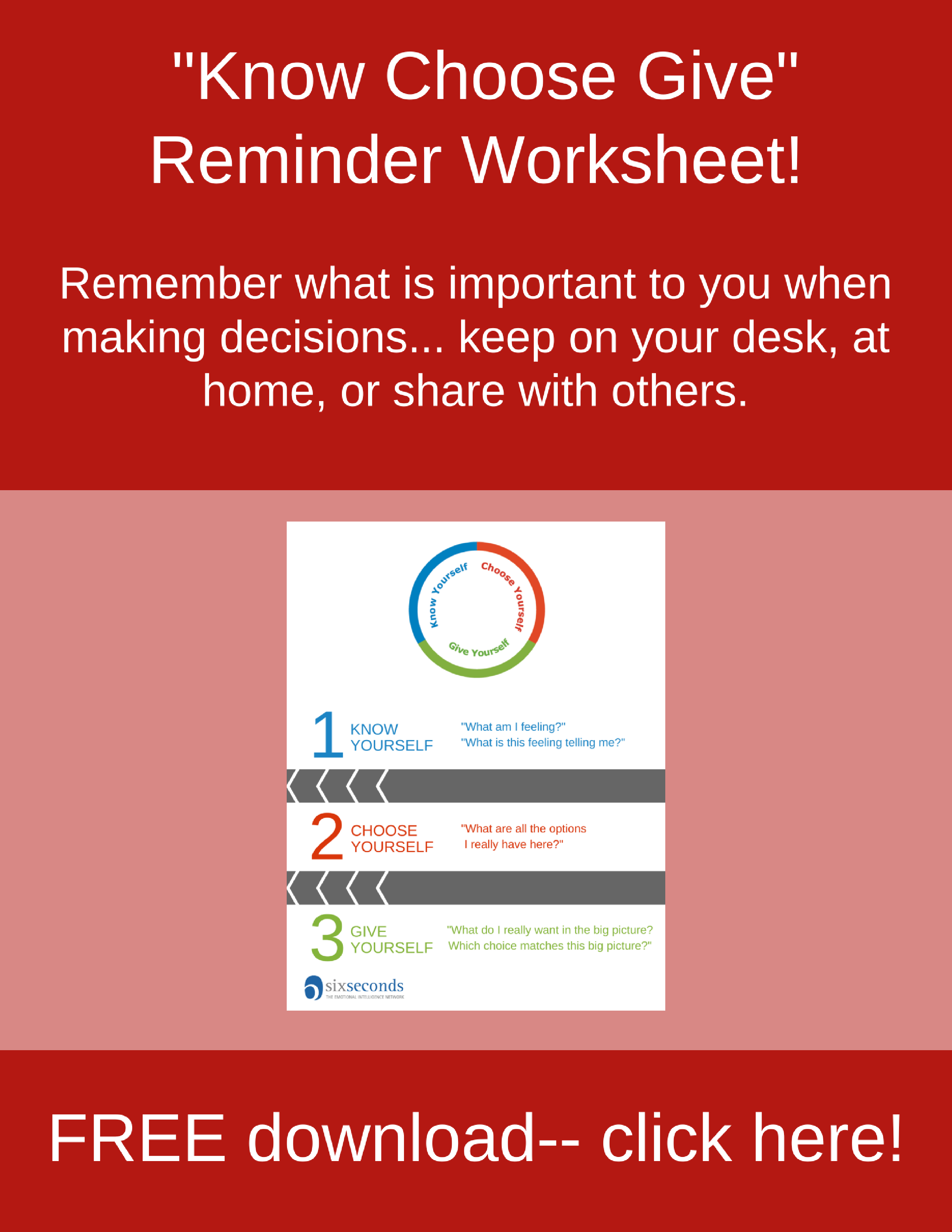 How to Deal with Anxiety

How to Find Your Life Purpose

How to be Happy

How to Improve Decision Making

What Does Optimism Mean?

Research: The School Case for EQ