Imagine you’re handling the biggest negotiation of your life – say, peace in the Middle East.  You need to leave emotions out of it, right? 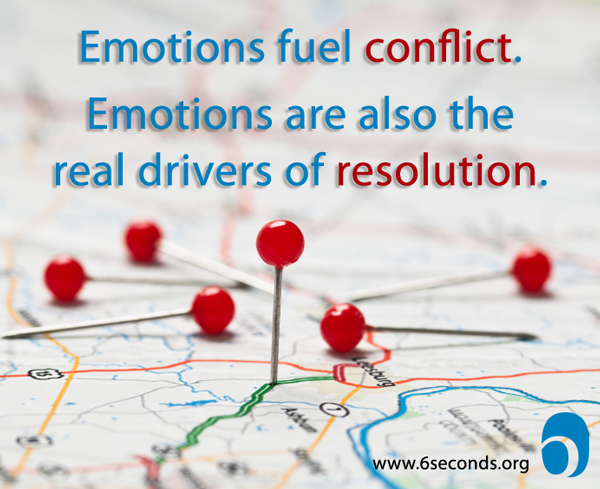 “You can’t,” says Daniel Shapiro.  As Founder and Director of the Harvard International Negotiation Program, Shapiro’s seen it first hand: “One can try to leave emotions out, but they are relentlessly there, for better or worse.  You cannot avoid emotions any more than you can avoid thoughts.  Given that reality, why not use them to be helpful?”

It’s no surprise that emotions can fuel a conflict.  What few people realize is that these same dynamics are also a key part of the solution.  Shapiro explained how it works in a keynote at Six Seconds’ NexusEQ Conference at Harvard Medical School Conference Center in June 2013.

What is required to solve the world’s most pressing problems?  “It’s easy to image a dynamic at play between Israelis and Palestinians. These parties have a host of differences, and the dominant stance for dealing with those differences tends to be adversarial.  They each focus on protecting their side’s interests, which implies winning OVER the other.” But Shapiro explains that it’s nearly impossible to find meaningful resolution from this position.

Moving out of that adversarial stance is central to Dr. Shapiro’s work.  In his book, Beyond Reason: Using Emotions as You Negotiate (with Roger Fisher), he makes the case that logic is not enough to achieve resolution.  Feelings drive people toward conflict – and toward resolution.

“At the end of the day,” Shapiro says, “the focus of my work is on conflict management: how people can deal with their differences more effectively.  Whether it’s an issue between heads of state or husbands and wives, almost universally they approach conflict as adversaries: ‘me versus you.’ This triggers a colorful set of stubborn emotions, which makes digging oneself out of that conflict very difficult.” 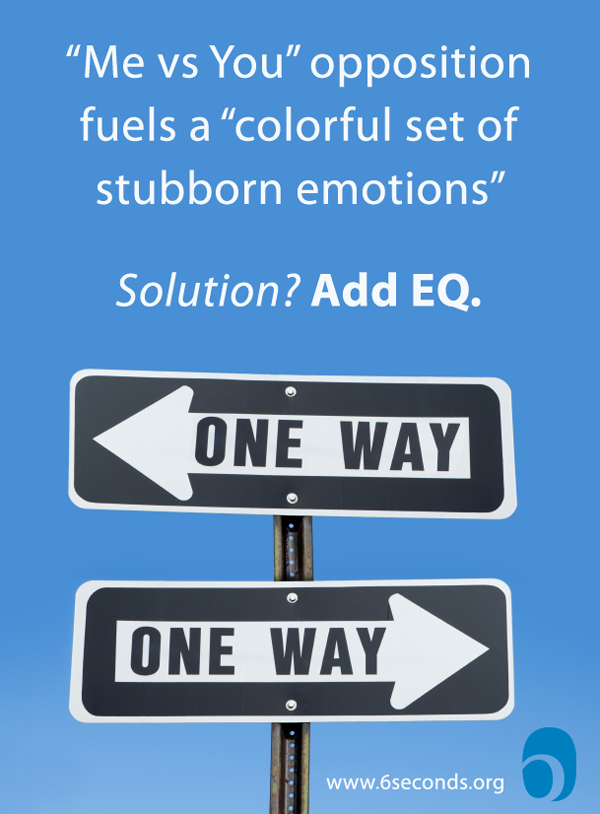 At this stage, feelings such as anger, fear, and hurt push people to narrow their focus to zero in on what’s not working instead of building long-term, cooperative relationships.

A small change unlocks the situation.  Instead of “facing off,” Shapiro says we need to get on the same side of the issue: “Shift the relational stance so it’s no longer ‘me versus you’ but the two of us working side by side facing a shared problem.  This creates a substantial emotional shift.”  Now the “colorful set of stubborn emotions” changes to expansive feelings such as curiosity, commitment, and even compassion.

The big challenge is that theoretical knowledge is insufficient. “Conflict resolution requires not just our cognitive understanding of how to deal with differences; it’s also about building our internal resources to be able to implement those processes.  The skills of emotional intelligence help people take action to move from dissent to collaboration.”

In a negotiation or conflict, there is the problem itself (the substance) and there is a surrounding set of emotional and relational issues (the context).  Shapiro points out that “typically a negotiation focuses on the substantive issue: the location of an international border, or where to go on vacation.  That’s important, but it’s not enough:  To maximize value, we need to look beneath that substance to see what’s really driving the conflict – to deal with the emotional dimension effectively.”

There are many powerful skills that Shapiro and colleagues teach at Harvard Law School and in negotiation programs around the world to handle these substantive issues.  But to see “underneath” the presenting problem and work with the context, another set of skills is required: The skills of Emotional Intelligence.

Using this intelligence of emotions “cuts through” the surface of a problem and brings us to the core. “Politics and ideology, even differing dress, can distance us from others and others from us.  We lose sense of the profound possibilities of connection which exist between us —even in the face of an intractable conflict,” says Shapiro.  “Emotional intelligence, on some level, is a recognition of our shared humanity, and a set of skills that lets us connect. It’s hard to do, but with training one can do this more effectively.  More skills create more choice, which creates more potential value.”

“When I’m in a good mood,” Shapiro says, “it’s very easy to express gratitude.  When I’m in conflict, it’s much harder. In these tough times, positive emotions are even MORE needed, but very difficult to access.”

“There are a lot of deadly conflicts in our world, and one can quickly lose hope in the possibility of resolution.  This is equally true in personal relationships – conflict can feel overbearing and hopeless.”  The good news, Shapiro believes, is that “most conflicts CAN be worked out in a generally positive way.”

He points to South Africa and Northern Ireland as examples.  Just several years ago, few people believed that stable, positive resolution could occur.  Shapiro notes that “those two regions are a testament to the possibility of emotional transformation in a seemingly intractable context.  Things aren’t perfect today in either society — but they’ve come far – which should inspire all of us to recognize that the ‘stuckness’ we feel in a tough conflict may not be as intractable as our present emotions suggest.”

Again, Shapiro emphasizes that these examples are not just about negotiation, but reconciliation: “In Northern Ireland and South Africa, they have grappled not just with the substantive differences, but with the emotional complexities driving the conflict – working to create a different emotional context from which a new community could evolve.”  At the core, this is an emotional, relational challenge, and the skills of emotional intelligence are paramount: “It comes down to providing support for both dealing with the emotional wounds of the past and building a shared platform for positive future relations.” 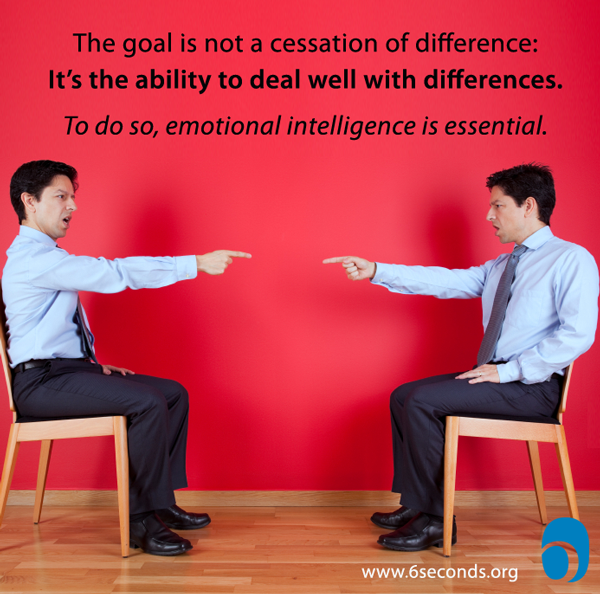 While outside negotiators can help in some conflict, Shapiro sees particular power in equipping people with the skills themselves.  That’s why the Harvard International Negotiation Program is working with the World Economic Forum to create the world’s first Global Curriculum on Conflict Management for senior global leadership.  “Because emotions are incredibly important to effectively deal with conflict, the toolkit includes a core set of five ‘rational’ tools as well as five ‘emotional’ tools.”

At present, they’re teaching top level global and corporate leaders, but Shapiro says the goal is much larger. “What if we could translate and apply this material to youth around the world—so they would have a shared language for dealing with conflict and its emotional side?”

The goal of this work, Shapiro notes, “is not a cessation of difference:  It’s the ability to deal well with differences.  Whether you are a senior executive or an entry level employee, a parent or child, we all face conflict – the basic human experience is universal.”

Shapiro offers three key insights for all of us to deal well with differences:

Perhaps the best news is that all these skills can be learned, and that’s a central theme of the NexusEQ Conference in June.  Over eighty scientists and practitioners will meet in the Martin Conference Center at Harvard Medical School to share effective applications of emotional intelligence.  According to Shapiro, this has bottom line value: “Rational negotiation skills are important, but more often than not, the stumbling blocks I see revolve around how people deal with other people.  Emotional intelligence is essential.”