Beyond Survival: Guilding Adversity With Hope 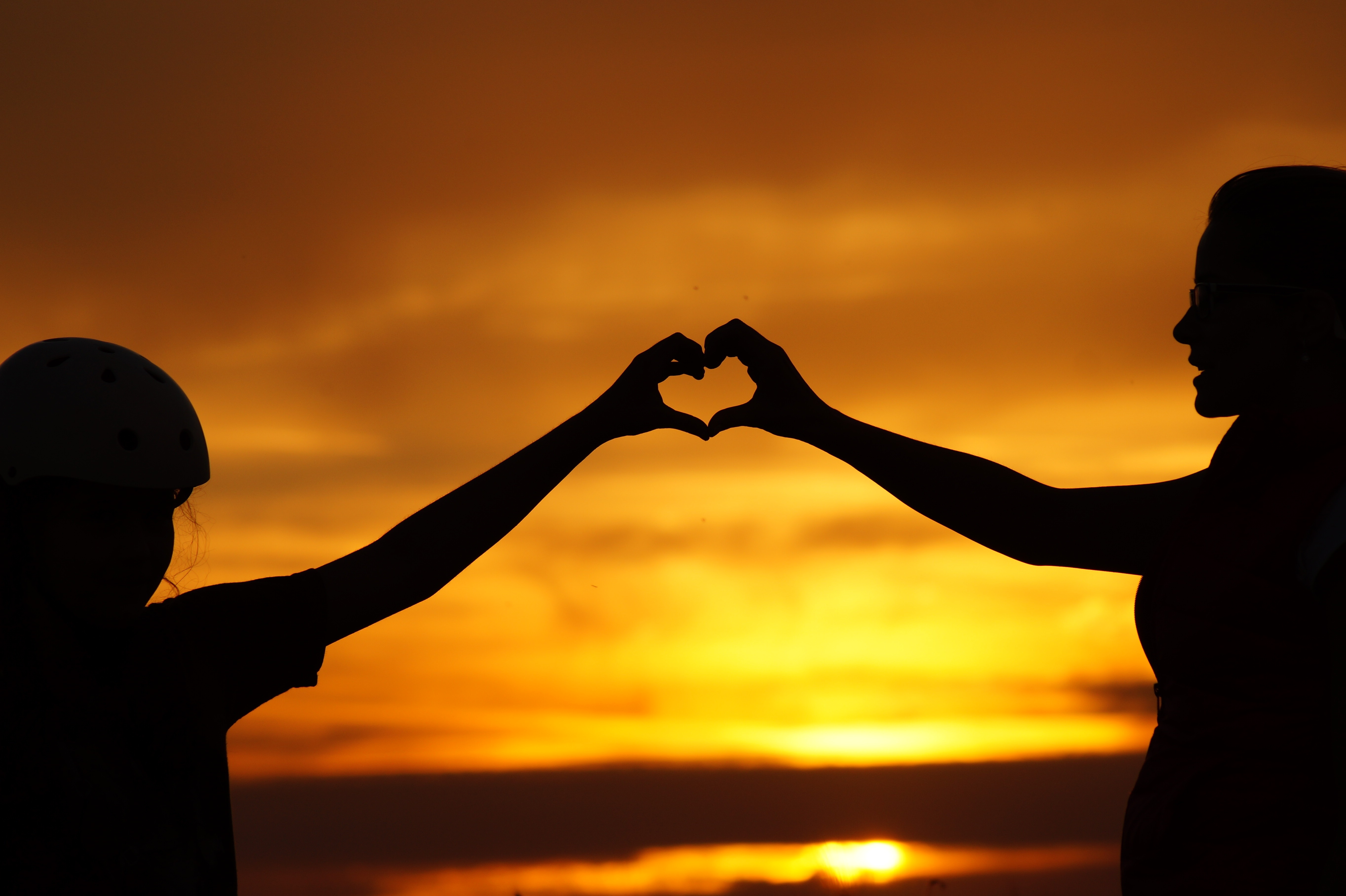 It was two days after Christmas, 1998, and my son, Caleb, and I were sitting in front of a roaring fire with cups of hot chocolate (mine had a bunch of tiny marshmallows) and we were reviewing and reminiscing about previous Christmas days — those memories that made us laugh or cry. And I said to Caleb, “And what during all these years was your favorite gift from me?” My brain was actively wondering what would stand out from the last 23 years — whether it was his first bike at eight, or those Nike shoes (they probably cost more than the bike) at ten, or the Star Wars Space Station when he was six.

When I shared this thought, Caleb looked at me, raised one blond eyebrow, and said, “Mom, you have got to be kidding!” I was really stumped. I couldn’t imagine what he was going to identify. I knew it wouldn’t be this year’s presents; they were all practical and geared to his senior year at the University of Oregon and included clothes, art supplies, books, etc.

Caleb continued, “You know, Mom, it is interesting that you would bring this up. I’ve been thinking about this subject myself. Give me a minute to collect my thoughts and then I would like to share them with you.”

So after two or three minutes with the fire crackling and popping, Caleb shared approximately the following words. I wish now that I could have had a tiny tape recorder taking down every word, but here’s what I remember. “The most important gift, Mom, was your unconditional love. I don’t mean willy-nilly acceptance, because that’s not what our relationship has been about. I mean that even though you sometimes, maybe even often, didn’t approve of my choices, you were always there for me — a steady and available listener. And when I was through talking, you would provide constructive criticism, your own learned lessons, and always encouragement. It was from this support that I built a backbone that would allow me to be a risk taker and demonstrate my own courage.”

“Second, Caleb continued, “and this may be even more vital than the love because I think most mothers love their kids, somehow you always managed to build or remind me to build a chain of optimism, even when I was leaning toward negativity or pessimism. You taught me positive self-talk and hope for the future. I want to build my life on this point of view and make it my legacy for future generations.”

Of course just telling this story brings tears of joy to my eyes, partly because these are among the gifts I most want my son to treasure. And also because I know they have kept him going through many challenging adversities.

The first of Caleb’s adversities that I can remember were his “night shoes.” When he was seven or eight months old, Dr. Cook, his pediatrician, said his legs were too straight; they needed to bend more at the knees. We went to an orthopedic specialist who prescribed special high-top leather shoes screwed onto a metal bar which would keep his legs apart and help the bones grow and develop in the proper way. Caleb was to wear them every night. Obviously, he didn’t like them, crying when I put them on, waking up in the middle of the night and bellowing, and being so joyful in the morning when they came off.

I remember saying to him frequently, “Caleb, this won’t be forever — only six, five, or four more months.” Or “Caleb, aren’t you glad it’s only your feet; just think if you had to have ‘night gloves’ as well.” And, “Caleb, you can make a difference by doing this every night and not taking a ‘night shoe’ vacation and by being consistent about this opportunity.”

We weathered the night shoes, but it did not prepare us for the adversities Caleb faced when he was ten. His father, whom Caleb adored, became heavily involved and addicted to cocaine, probably because of some inappropriate moral decisions and inadequate consequential thinking. These choices also led Caleb’s father to contract a terrible disease: he was diagnosed as HIV positive.

This adversity was a major one, and I was not sure how to move forward. But I found myself repeating the lessons learned from the “night shoes.” “Caleb, this crisis is isolated. Yes, your immediate family is dramatically affected, but we still have Grandma and Grandpa, Uncle Pat, and Aunt Tamie. And Caleb you have so many loyal and supportive friends.”

“Caleb, this will not last forever; time will ease the disillusionment and the pain.”

“Caleb, we can grow and become stronger if we look at this as an opportunity rather than a total disaster. And Caleb I know you can find the courage to face this problem.”

It wasn’t until years later that I discovered the steps defined by Martin Seligman for teaching optimism. He outlines them in the book, Learned Optimism (Pocket Books, 1990). His data shows clearly that optimists are more motivated, more successful, have higher levels of achievement, plus significantly better physical and mental health. Aren’t these attributes and achievements we want for all of our children?

Unfortunately, current data from the National Institutes of Health also shows that American fathers spend approximately five minutes daily with their children — and mothers are only slightly better with 15 to 20 minutes daily. Moreover, the bulk of this time is spent in conversations that sound like the following:

• Have you finished your homework? Why not?

• Did you put the dishes in the dishwasher and remember to feed the dog?

• Have you called Grandma to thank her for the Valentine card and check?

• What do you mean you haven’t practiced the flute yet! When are you going to do that?

And the list goes on indefinitely. Wouldn’t a written list be a better way to communicate this information? Instead, spend those precious face-to-face moments on the bigger and more significant matters: What happened today which needs to be celebrated? Or what discouragement did your child feel today? Was it striking out with the bases loaded? Was it a C- on the Spanish test? Was it someone who poked fun at his/her braces?

If so, help your child build an immunity to his/her setbacks and put-downs. Inoculate him/her with the skills of optimism.

“Let’s look at it this way,” I suggested. “This failure does not have to be permanent, pervasive, and personal. You can make it temporary, isolated, and change the end result with some work and effort on your part.”

I elaborated: “Have you always gotten D+ on your math grades?”

“Is your report card just one D after another?”?

“Is it possible that there are some ways you could change the outcome with some personal effort on your part?”

“Well, I didn’t study very hard. I could put in 15-30 minutes every day instead of just cramming just before the test.”

” I could ask the teacher for some additional help.”

Research indicates that more girls grow up with a more pessimistic explanatory style than do boys (Howard, 1994). Some psychologists suggest that this happens because parents and teachers tend to lavish praise on boys and neglect the girls. Please be sure that your daughters learn to attribute their successes to their abilities and that their failures can be reversed.

Each day life brings forth adversities. Most of them are tiny but still stressful. They include such things as preparing a presentation for a community group; enduring someone who wonders “have your put on weight?”; being pushed aside in the grocery store line by someone who believes they are more important; or being let down by someone who was suppose to come and volunteer at the homeless shelter. And sometimes the adversities are more dramatic — such as hearing that your niece at 21 year has pre cancerous uterine cells; or that someone you admire has criticized your most recent book; or that someone you inadvertently hurt has refused to accept your apology.

Whether big or small the adversities of life will continue to plague us. However, withstanding and overcoming them will allow us to build walls of personal hope and peace.

So if I could only teach my child one lesson, this would be it. I would teach him/her this is the skill he/she will need to overcome disappointment, hurt, and despair. I would model for him/her with my words and actions that adversity can be gilded with hope; I would demonstrate that adversity brings gifts of growth (i.e., self-esteem, courage, self-reliance, etc.) which will be his/her parachute/safety net for the future.

Isn’t this a legacy that is more important that money or silver plate or stock and bonds? Perhaps twenty-plus years into the future Caleb, the father, will have a similar post-Christmas chat with a son and daughter of his own who share that the best gift they ever received from him was his gift of optimism to them.

Update On Caleb: Caleb is now an artist and designer living in Southern California.

Update On Anabel: Anabel is President of Six Seconds — a non-profit organization committed to providing resources, materials, and training to teach social and emotional skills to adults and children. Above all, she wishes to ground individuals in hope and resiliency.