The Neural Power of Leadership: Daniel Goleman on Social Intelligence

Why should leaders care about feelings?

Daniel Goleman, author of Emotional Intelligence and the new Social Intelligence, says the latest science makes a compelling case. He discusses a new leadership imperative for optimizing human performance and the research that makes attention to feelings a bottom-line priority.

In 1995 Daniel Goleman sent a wave of hope around the world by presenting the groundbreaking science of Emotional Intelligence in a compelling work by that title. His new book, Social Intelligence: The New Science of Human Relationships, takes the case to a new level showing how emotion is a critical component of leadership and learning. 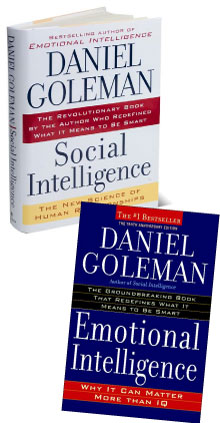 In Emotional Intelligence: Why It Can Matter More Than IQ, Goleman reported on a variety of research and practice making the case that skill in handling emotion is as significant as skill in handling other forms of data (such as those measured on an IQ test). Examining both scientific theory (including the work of Salovey, Mayer, BarOn, and Damasio) and learning programs (including Six Seconds’ Self-Science process) Goleman identified that one commonality among all these models of emotional intelligence (abbreviated “EI” or “EQ” for ’emotional quotient’) is they address both the inner world and the way what’s inside affects the outside. This led him to propose a model with four quadrants, two inner directed (emotional awareness and managing emotions) and two outer directed (social awareness and managing relationships).

At the time of the first Emotional Intelligence book the field was very young. Goleman reported on the emerging evidence that emotions might actually help thinking. Neuroscience imagery was just getting advanced enough to show hints of how the brain actually processes information, and scholars and practitioners were beginning to measure and teach about this linkage.

Now over a decade later the science has advanced dramatically and Goleman’s new book documents some of the critical developments. “I couldn’t have written this book when I wrote emotional intelligence because the science is so new; it didn’t exist in 1995. The field of social neuroscience has only published its first journal in the last few months. And social neuroscience expands the domain of studies from one brain and one body and one person to two or more brains and body and people. In other words, it’s a neuroscience of what happens during interaction. This turns out to be extraordinarily important as an insight and helps us understand the parallel circuitry that handles our relationships.”

The Neuroscience of Human Connection

The “parallel circuitry” is a phenomenal discovery that, like some many discoveries, happened by accident. Neuroscientist Giacomo Rizzolatti, MD, and his colleagues at the University of Parma were mapping the brains of monkeys to see how specific areas of the brain function[1].“They were monitoring a cell,” Goleman says, “that only fired when the monkey lifted its arm. One day, the cell fired even though the monkey hadn’t lifted its arm — they realized he was watching a lab assistance eat an ice cream cone. Whenever the human lifted his arm, the monkey’s cell fired.” In other words the neuron was activated as if the money were taking action. “It turns out to be exactly what happens in human brains too. As you see something, it activates that pattern in you.”

Our brains our wired to connect with others – here is why

The work with mirror neurons is proceeding furiously around the world. Christian Keysers and Bruno Wicker have shown that one person’s emotions activate another person’s mirror neurons [2]. At the University of San Diego Dr. V.S. Ramachandran is studying the link between mirror neurons and autism. In short, our brains are constantly reacting to the environment and literally changing based on the people around us.

“Mirror neurons are a kind of ‘neural wi-fi’ that monitors what is happening in the other people. This system tracks their emotions, what movements they’re making, what they intend and it activates, in our brains, precisely the same brain areas as are active in the other person,” Goleman explains. “This puts us on the same wavelength and it does it automatically, instantaneously and unconsciously.”

Emotions and The Bottom Line

While “being on the same wavelength” is fabulous when a team is working well, we’ve all seen how one grouch can sabotage the flow – especially when it’s the boss. Emotions are infectious, one person’s mood literally changes the others’ brains. “Because the social brain connects us so intimately, it provides the mechanisms that make emotions contagious and emotions are most contagious from the most powerful person in the room outward. This means that, for example, if a boss is angry or belittling or hypercritical, that the boss is going to create a state in the person who’s a target of that that it actually disables them from being able to work at their best. So that boss is, in effect, creating his or her own problems.”

For a decade EQ trainers and coaches have worked with leaders to be more aware of the shadow they cast or the light they shed on an emotional level. Goleman says now the neuroscience makes the case so strongly that even the most “leave those feelings at the door” kind of boss has to consider the emotional fallout of his reactions. “The internal state of the leader affects the internal state of the people and therefore, their ability to perform. That has profound implications for leadership.”

Bottom line: If you want to optimize performance, emotions are key

Yet for bottom-line, quantitatively oriented leaders, isn’t this squishy emotional talk just a distraction from accomplishing the work at hand? Not so says Goleman – because even the most spreadsheet-driven executive needs to be concerned about optimal function. “The brain is designed to have the reciprocal relationship between states of negative emotional arousal and of optimal cognitive efficiency. Optimal cognitive efficiency means that the brain is working at its best for the task at hand.”

“If you want maximal productivity and if you want work that gets the best results,” he continues, “you want the people doing that work to be in the optimal brain state for the work. You are a person who can evict them from the zone of optimal performance by slothfully handling your own interactions with them. So it’s up to you to take responsibility for your impact on their ability to work at their best.”

The bottom line is “leaders have to take more responsibility for the impact they have on the people that they lead and the people around them. And every coworker does as well.”

Social Intelligence provides numerous examples making the case for this heightened emotional awareness. One comes from a study at the Management School at Yale University. “Actors were recruited to become parts of groups that were working together on a project. When the actor playing the leader is very upbeat and positive and warm, then people feel upbeat — and they function better, by objective standards, as a team. If, however, the leader is critical, angry, and negative, everyone else becomes unhappy and distressed and they function more poorly as a team.”

For example, in a now-classic study Alice Isen studied radiologists, finding positive mood enhanced their accuracy[3], or Sigal Barsade’s work on how leaders’ positive moods increase profitability. On the other hand, in some situations a “bad mood” is more effective. For example, Kimberly Elsbach and Pamela Barr found that people in negative moods use a more structured approach to decision-making, but even they don’t advocate for “bad mood organizations.” Rather, mood, or feelings, are one part of the evaluative process – as Elsbach and Barr conclude: “In making complex decisions, mood matters”[4].

The Social Intelligence that lets someone be aware of and manage these dynamics, Goleman asserts, are the lifeblood of an excellent leader. “The mistake that gets made by HR is they see someone who is fabulous individually, whether it’s a surgeon or a computer programmer, and they promote them to head of the team or head of the division, assuming that what made them so good as solo stars is going to help them be leaders. But if they lack the emotional intelligence abilities, empathy and skill at interaction, they’re going to be duds. And this happens over and over and over in organizations.”

The new science of Social Intelligence also has profound implications for education and parenting. Just as leaders can eject their team members from the mental state that fosters optimal performance, the same is true for the classroom. The conclusion: The teacher’s attitude and caring are at least as significant as the technique and content of the teaching. At a school-wide level, the emotional tone of the school will make or break it’s effectiveness.

the emotional tone of the school will make or break effectiveness

For children and adults, mirror neurons and contagious emotions mean role modeling matters more than ever. “Mirror neurons really support the importance of role modeling because we know that people can learn by seeing someone execute well. We now understand the mechanism: When you watch someone else perform, that elicits in the same arousal pattern in you. Kids do this all the time; this is how toddlers learn at such a voracious speed. They learn how to do virtually everything they do without being explicitly told. By watching others, people develop an internal map of the observed behavior.” These mirrored arousal patterns become a kind of template, a map, that makes imitation so easy.

The Skills for Optimal Performance

In the Six Seconds Model of Emotional Intelligence, this awareness is captured through set of skills called “Give Yourself.” Given that we have such a profound affect on one another – that we literally shape each other’s brains, it becomes critical to consider the ripples we’re sending out. Anecdotally it’s evident that some leaders inspire optimal performance because they are so purpose-driven and operate with such high levels of integrity. They seem to send out a kind of magnetic force that draws out the best in their people. Now this emerging neuroscience helps us see why these “human signals” are so powerful.

Daniel Goleman is one of the leading voices on the role of emotions and performance. The author of five books on the subject, his 1995 Emotional Intelligence is an international bestseller with over 5 million copies in print. To read more about Daniel Goleman’s work, visit his website at www.danielgoleman.info

[3] For example, Alice Isen’s chapter on “Positive Affect and Decision-Making” in The Handbook of Emotion (1993).

Follow me
Latest posts by Joshua Freedman (see all)